Stop the War rallies in support of Julian Assange

This article is over 10 years, 11 months old
Over 300 people packed into Conway Hall in London on Monday evening for a Stop the War Coalition meeting in support of Wikileaks founder, Julian Assange, who faced his first day in court fighting his extradition to Sweden.
By Patrick Ward
Downloading PDF. Please wait...
Tuesday 08 February 2011

Over 300 people packed into Conway Hall in London on Monday evening for a Stop the War Coalition meeting in support of Wikileaks founder, Julian Assange, who faced his first day in court fighting his extradition to Sweden.

‘No democracy has ever been harmed by a public who is well informed,’ said Jemima Khan. ‘US vice president Joe Biden said that Julian Assange is a ‘high tech terrorist’. That’s the same Joe Biden who said that Hosni Mubarak is not a dictator.’

‘We live in a world where lies are protected and revealing truth is criminalised.’

Tony Benn also addressed the crowd: ‘In the last few weeks we have been hearing a lot about events in Tunis and Cairo – democracy is being expressed all over the world.”

“It is essential to democracy that we know what governments do in our name,” he said. “This story affects our right to claim we govern ourselves. If Tunisia and Egypt can make a stand, we can do the same here.”

“The first leaks were about civilian deaths in Iraq and Afghanistan,” said Lindsey German from the Stop the War Coalition. “We were told for years that they didn’t know the death counts. Now we know they did count them up but they were too great to tell anyone about them.”

“Our movement here has to be in solidarity with Wikileaks.”

Veteran anti-war activist Tariq Ali told the audience, “These things happen at times of crisis and times of war.

“From when we had the first war in the Gulf we had embedded journalists, so they can be controlled… Being embedded means to be controlled.

“Wikileaks is part of building a network of alternative media… It is doing the job mainstream journalists refuse to do,” Ali continued. “For that reason alone we should be grateful to Wikileaks and Julian Assange.”

Ali argued that the victimisation of Wikileaks was meant to be a deterrent to others. But this tactic would fail “because the technology now available means that large numbers of people all over the world” can spread leaked information.

But clamping down on this information was ineffective, he argued. Referring to the Egyptian government’s closure of Facebook and Twitter, and its limitations on mobile phone communications, he said, “They did it for three days and it didn’t work. More people came out to hear what was going on rather than staying at home.” 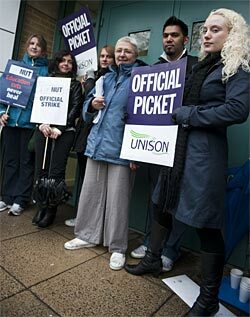 ‘Flush job losses down the Tube’, say workers as they prepare strike 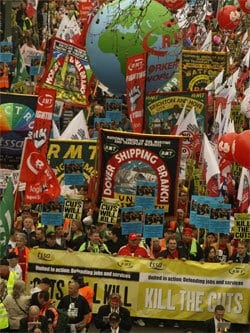 TUC march against the cuts as it happened