This article is over 14 years, 8 months old
The strength and determination of the anti-war movement in Britain was clearly demonstrated at the Stop the War Coalition’s annual conference held in London last Saturday.
By Esme Choonara
Downloading PDF. Please wait...
Tuesday 30 October 2007

The strength and determination of the anti-war movement in Britain was clearly demonstrated at the Stop the War Coalition’s annual conference held in London last Saturday.

Opening the conference Stop the War chair Andrew Murray reminded delegates of the achievements of the movement over the last year and warned of the growing threat of an attack on Iran.

He said, “Our work can make the difference between life and death for tens of thousands of people. Nothing can be more important than that.”

Delegates heard from speakers who demonstrate the real breadth of the movement – including Guardian columnist Seamus Milne, George Solomou from Military Families Against the War and Jeremy Corbyn MP.

The conference discussed topics including the growing brutality and resistance to the occupation in Iraq and the attacks on civil liberties in Britain.

Anas al Tikriti from the British Muslim Initiative and Kate Hudson, chair of CND, both spoke of the importance to their organisations of their joint work with the Stop the War Coalition.

Seamus Milne reminded people that the since its inception, the anti-war movement has “been a force for democracy at a time when democracy has been in short measure”.

The conference voted on a number of motions including opposition to US Missile Defence, a proposal to strengthen and expand local stop the war groups and to oppose the spread of the “war on terror” to Africa.

Stop the War convenor Lindsey German told delegates that the US is trying to turn Iran into a pariah regime and that the threat to Iran and the occupations of Iraq and Afghanistan are part of “the US attempt to reorder the world”.

To applause, she added that Stop the War will continue to fight for the right to protest. She said, “If there is an attack on Iran or if Turkey invades Iraq in the morning – it is currently illegal for us to demonstrate at parliament that evening.

Soldiers in silent revolt in Iraq 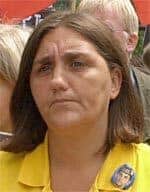 Rose Gentle: ‘I hope the truth will come out’