Straw’s record is put on trial

Straw’s record is put on trial

CIVIL RIGHTS lawyer and socialist Jim Nichol is to take on home secretary Jack Straw in his Blackburn constituency at the general election. He launched his Socialist Alliance election campaign at a 50-strong meeting in Blackburn last week.

Jim laid into Straw’s shameful record on civil liberties. “When Labour were in opposition the Conservatives were planning to build a new detention centre,” he said. “At the time Jack Straw as shadow home secretary said the plans would be scrapped. Once they got into power, not only did they carry on with the plans, they built another two. Let’s not mince words-these are prisons for children, including some as young as 12.”

John Nicholson, former deputy leader of Manchester City Council, donated 500 to the campaign. He won that money from Greater Manchester Police after wrongful arrest. A collection from the meeting raised another 630 for the Socialist Alliance, and a further 20 was donated by Hyndburn trades council.

The meeting had many new faces, including students from the local further education college. One Labour Party member ripped up his party card on the night.

ON THURSDAY of last week my school, Ryton Comprehensive in Gateshead, held a mock election in which the Socialist Alliance came second behind the Liberal Democrats, pushing New Labour into third. The Tories came last behind the Greens and Communists.

Earlier in the campaign Socialist Alliance candidate Terry Rodgers had visited the school to take part in a “Question Time” event. Terry said the atmosphere in the school was brilliant, the walls being plastered with Socialist Alliance posters and the students even making their own “People before profit” badges.

SOCIALIST Alliance supporters formed a cavalcade of 12 cars and toured the Bristol South constituency on Saturday.

Candidate Brian Drummond held street meetings with “Tony Blair”. There was a great deal of noisy heckling, with shoppers and passers-by joining in. More than 20 supporters joined the activity and several streets were leafleted.

BRIGHTON & Hove Socialist Alliance drew nearly 300 people to a fundraising gig recently. They are now over halfway to their 3,000 election target.

READING Socialist Alliance stalls are attracting attention and last week raised over 20. People are very enthusiastic and many are willing to help with the campaign.

They held their first social event recently, a curry night. This was attended by ten people and raised 100 for the election campaign fund.

EDMONTON Socialist Alliance is holding a ballot over the next four Saturdays over tube privatisation. Last week we signed six people up to the Socialist Alliance. The New Labour election agent approached the stall, but was seen off by an ex-Labour member of 24 years standing.

Around 100 people, including a sizeable contingent of pensioner activists from inside and outside the Labour Party, heard Liz ex-plain why she had left the Labour Party and was now supporting the alliance. It was clear from the discussion that a lot of local Labour Party members had turned up to hear Liz speak.

The fraternal debate that followed showed how alienated many ordinary Labour Party members feel from their own party leadership and its right wing policies. A left wing Labour Party activist, who has just been picked to fight a council ward by-election in Islington, was almost in tears as she explained why as a socialist she was still inside the Labour Party.

No one who spoke from the Labour Party defended their leadership. Neither did they have a fundamental disagreement with the Socialist Alliance’s programme. Important questions were raised from the floor as to whether the alliance was a serious party, and if votes for it might split Labour’s support and let the Tories or Liberals in.

More than 100,000 sign petition to stop extradition of Babar Ahmad 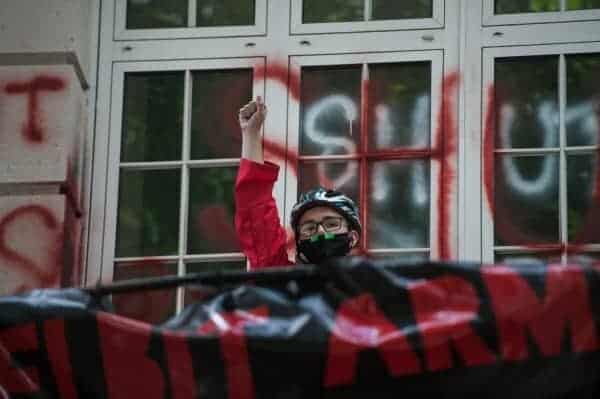