A dispute between refuse workers and Salford council has been resolved after the council backed down.

The refuse workers, members of the Unite union, have been demanding an end to a two-tier pay structure for council employees and agency workers.

As well as a series of one-day strikes, the workers were involved in a continuous overtime ban and a work to rule.

Council bosses claimed the use of casual labour was necessary due to high levels of absenteeism among full-time staff.

The union says that more than 50 agency workers in the department have been employed between 12 months and five years on lower wages without any potential for permanent status. Under the current pay structure, permanent council workers earn £7.92 an hour, compared with £5.35 an hour for agency staff.

After the strike action the council has now agreed to make the jobs permanent and to review workloads for other workers.?One refuse worker, who has worked for Salford council for 18 years, said, “The way agency staff are treated is terrible. It is like we are back in the 1930s. We had to stand up for all our rights. And it is about time the council listened.”

The terms of the new agreement were greeted with cheers at a mass meeting, as the workers voted unanimously to accept the deal.

The dispute was sparked after it was revealed that the agency workers had to queue at 5am each morning to discover whether they had a day’s work or not – a practice the council no longer continues.

The agreement was described by the union as “a commitment to 100 percent service delivery by a permanent workforce”.

Following a review, the council will ensure that staffing levels for refuse collection and street cleansing are established on the basis of need.

Any additional staff will be recruited on permanent contracts. The permanent hiring of a number of the agency workers started this week. The recycling services will transfer to direct council contracts by November.

Neil Clarke, regional industrial organiser for the T&G section of Unite, said, “The outcome surpasses the expectations of our members at the outset of the dispute.

“It represents a magnificent victory and demonstrates what can be achieved by organised workers who campaign collectively.”

One of the agency workers told Socialist Worker, “This is brilliant. I’ve worked as agency staff for the council for three years. We have no equality, no equal pay, and no equal sickness pay with full-time staff.

“But everyone stuck together and the council have had to give me my rights.” 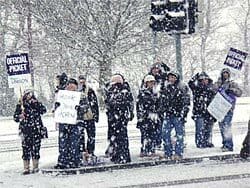