Hampshire County Council is seeking to make 27 librarians redundant and cut the pay of a further 17 by approximately £4,500 a year.

The strike follows an overwhelming vote in favour of action after bosses refused to reconsider the proposals. Staff are angry at this attack on their jobs and pay, and on a valued public service.

Unison rep Steve Squibbs said, “The knowledge, skills and experience that librarians have developed over years of service will be lost overnight.”

The strike closed about half of Hampshire’s 54 libraries. There were lively picket lines at many branches. 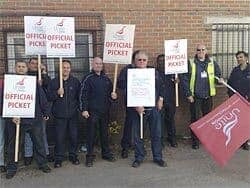