Strike in schools can teach Gove a lesson

This article is over 8 years, 3 months old
Teachers plan to walk out against attacks on their pay, pensions and conditions, writes Sadie Robinson
Downloading PDF. Please wait...
Tuesday 24 September 2013

Tens of thousands of teachers are set to strike next week in a battle against Michael Gove. The Tory education secretary is coming after the pay, pensions and conditions of teachers across England and Wales. He also wants to impose damaging changes to the curriculum and force children to take yet more tests.

Teachers in the NUT and NASUWT unions were set to walk out in Yorkshire, the Midlands and Eastern regions on Tuesday of next week.

June Wischhusen is an NASUWT member. She told Socialist Worker, “We’ve got to strike. We can’t go on being undermined by Gove. Teachers know best how to teach children but we aren’t being listened to. I’m worried about the impact of Gove’s changes on GCSE students. They’ll have to take all their exams at the end of their courses. And his new curriculum is like something out of the 1750s.”

NASUWT member Michelle teaches in Bedford. She said, “It’s sad to say about a job you love but if the attacks carry on, no one will want to go into teaching.”

Conditions are already bad for teachers—and will only get worse if Gove gets his way.

Abby is a teacher in Ipswich. She said, “I’m 37 and they’re expecting me to work another 30 years. I won’t be physically able to do it. Gove needs to go and meet some 67 year olds and see for himself if they can work in schools.”

Lucy also teaches in Ipswich. “We haven’t had a real pay rise for years,” she said. “And we’re losing more money because our pension contributions have gone up.

“You have so much money allocated for bills, rent and so on—and then suddenly you have less money coming in.”

Parents and other trade unionists back the teachers. When teachers in the north west of England struck on 27 June they won massive support.

Gove claims that the strikes will make teachers unpopular. In reality it is Gove who is unpopular.

Previous teachers’ strikes won mass support. Thousands joined marches on the strike day in the north west of England on 27 June. People applauded as the march in Liverpool wound through the city centre.

Elizabeth is a parent who spoke at a 250-strong rally for education in Cambridge last Saturday. She told the crowd, “I would trust a teacher’s opinion on how to educate children rather than a politician any day of the week.”

Teachers rallied to defend education in Cambridge and Exeter last Saturday. NUT deputy general secretary Kevin Courtney told the Cambridge rally, “This is not just about teachers. It’s a much bigger assault on education.”

Teachers can win this dispute. But unions need to fight together across England and Wales—and call a programme of escalating action that can get Gove on the run.

The unions have called a further regional strike for 17 October. Teachers in London, the North East, South East, South West and Northern regions will walk out on the day.

They also say there will be a national teachers’ strike in November.

Many activists are calling on union leaders to name the day so they can start preparing for the action.

Union leaders confirmed last week that they would not be calling teachers in Wales out on strike. This is because Welsh education minister Huw Lewis is talking to the unions.

Yet the Welsh government can’t make decisions on teachers’ pensions or pay. And union leaders say that if Gove agrees to talks he could avoid the strikes.

Nick Grant is on the NUT national executive committee. He told Socialist Worker, “The point of the strikes shouldn’t be simply to achieve talks.

“It should be to reverse the pension contribution and retirement age rises, as well as winning an inflation-proofed pay award.”

Schools across Britain are currently drawing up pay policies.

The NUT and NASUWT have issued joint guidelines on what the policies must, and must not, contain.

Unions say that they will call teachers out on strike in any school that goes against the guidelines—on full pay.

Teachers should seize this opportunity to win decent pay policies.

Paul McGarr is a teacher in Tower Hamlets, east London.

He told Socialist Worker, “Three schools wanted to push through policies that weren’t in line with union guidelines.

“In each case teachers threatened to strike—and they got a result. It sent a message to every school management that the union is serious.” 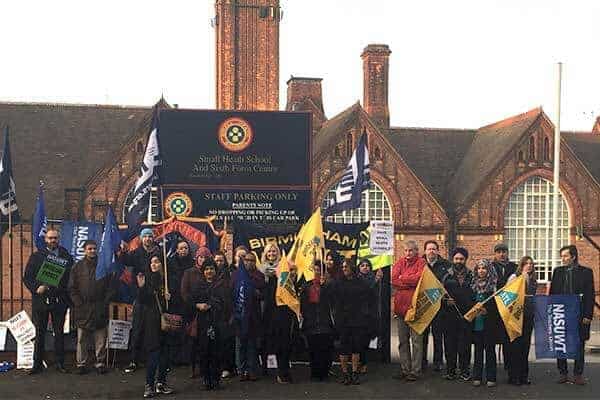 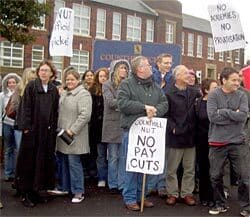