Teachers at Westways Primary School in Sheffield began a two-day strike on Tuesday of this week in a row over workload and other issues.

It follows a two-day strike on Wednesday and Thursday of last week.

The NEU union members are opposing changes in the school including a shorter playtime for early years children and Sats-style tests every half term in years three to five.

Simon Murch is a primary school teacher and joint division secretary of the NEU in Sheffield.

He told Socialist Worker, “The strike at Westways Primary is about the imposition of new practices by the Executive Headteacher.

“These may result in short-term gains in English and maths scores. But the children will lose out in the long-term as their curriculum is narrowed and the school is turned into an exam factory. Teachers don’t want that, nor do parents.”

Strikers received messages of support from union groups and parents across Britain. Sheffield Momentum has sent a statement of support as has Sheffield Trades Council.

Nearly 700 people have signed a petition supporting the strike, started by a parent.

“All she cares about is the results of this school and that’s not what the ethos of Westways is about.”

Sign the petition to support the strikers at bit.ly/2i4lpI0

NEU union members at Avenue School in Newham, east London, were set to strike this Thursday.

Workers are fighting against plans to turn the school into a privately-run academy.

They held a successful walkout at the end of last month when many parents, children and other supporters joined strikers on the picket line.

Union members at Royal Docks Community School were set to strike on Wednesday of this week, also against academisation.

Teachers, parents and others from across Newham plan to protest outside Hallsville School on Radland Road on Wednesday 20 December at 4pm.

The school is set to become part of a multi-academy trust on 1 January next year.

‘Hands off our hijabs!’

Anti-racists protested in London and Birmingham on Tuesday lunchtime over the Ofsted watchdog’s call for schools inspectors to question Muslim girls who wear the hijab or headscarf.

“Ofsted is picking a fight with us,” she told Socialist Worker.

“Singling out girls wearing hijabs will mean they get bullied in the playground.” 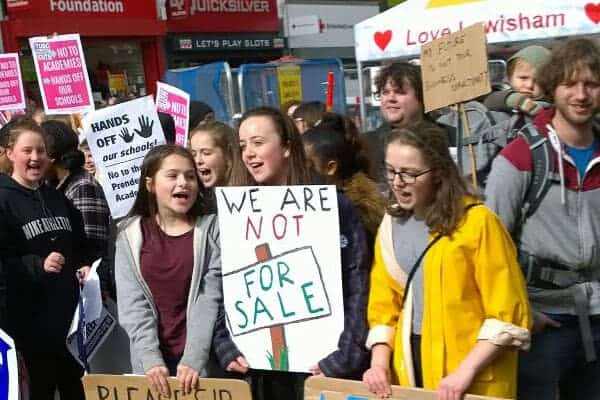