Strike scheduled to bring tube to a halt

This article is over 10 years, 2 months old
London Underground workers employed by Tube Lines were set to start a 72-hour strike at 4pm on Tuesday of this week.
By Anindya Bhattacharyya
Downloading PDF. Please wait...
Tuesday 24 April 2012

London Underground workers employed by Tube Lines were set to start a 72-hour strike at 4pm on Tuesday of this week.

The RMT union members want the right to join the Transport for London (TfL) pension scheme and the same travel pass rights that other tube workers get.

Tube Lines deals with maintenance and upgrade work on the Jubilee, Northern and Piccadilly lines.

Around 1,000 workers are involved in the dispute.

These include London Underground’s Emergency Response Unit (ERU), which deals with situations ranging from broken rails to suicides and terrorist attacks.

The RMT says it “does not believe it will be safe to operate the tube network” while ERU and other Tube Lines workers are on strike.

The strike could bring large sections of the tube to a halt as workers decide it is unsafe to work.

Bosses were shrugging off the threatened action earlier this week.

Tube Lines chief executive Jon Lamonte declared on Monday that the strike would have “no significant effect on tube services”.

The strike comes in the midst of the contest for London mayor. Labour’s candidate Ken Livingstone laid the blame for the strike on his Tory rival Boris Johnson, who has refused to meet tube unions.

A deeper issue looms in the background of the Tube Lines dispute—privatisation.

Nevertheless London Underground managers are looking to transfer Tube Lines back to the private sector.

That is why they are refusing to grant Tube Lines workers the same conditions enjoyed by other London Underground staff.

Emergency Response Unit picket lines are planned at Acton, Battersea, Camden and Stratford at 6pm and 6am on Tuesday, Wednesday and Thursday 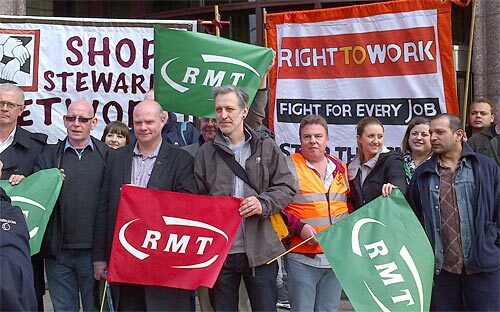