This article is over 16 years, 8 months old
Some 2,000 council workers in Sefton, Merseyside, struck on Wednesday and Thursday of last week. They were demanding the reinstatement of two leading trade union activists suspended by Sefton council on trumped-up disciplinary charges.
By Anindya Bhattacharyya
Downloading PDF. Please wait...
Saturday 10 September 2005 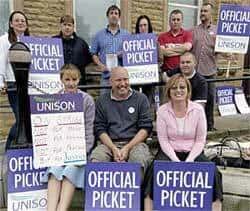 Some 2,000 council workers in Sefton, Merseyside, struck on Wednesday and Thursday of last week. They were demanding the reinstatement of two leading trade union activists suspended by Sefton council on trumped-up disciplinary charges.

The strike, called by the ­Unison union, closed down social security offices, leisure centres and libraries.

“The action has been really solid and well supported,” said Paul Summers, branch organiser of Sefton Unison and one of the two suspended reps. “People are disgusted at the way Sefton council has treated us.”

A 24 hour strike on 9 August forced the council to lift four of the suspensions. But Nigel and Paul remain suspended — and both are threatened with dismissal for gross misconduct.

The suspended union activists had taken part in a Defend Council Housing (DCH) demonstration against Sefton’s plans to privatise its council housing.

Tenants rejected those plans in a ballot last month, despite a barrage of propaganda from the council. The council has since accused anti-privatisation campaigners of running a dirty tricks campaign — a claim angrily denied by both DCH and Unison members in the area.

The council also accused the Unison reps of violently intimidating staff at the housing office outside of which the DCH protest was held. But these charges are entirely bogus.

CCTV footage, police logbooks and eye witness statements from councillors, tenants and workers all show that the protest was peaceful and passed without incident.

The strikers have support from every level of the union. Dave Prentis, Unison’s general secretary, visited the strikers on Wednesday of last week. He told them, “We cannot stand by and allow the council to get away with victimisation.”

Workers believe the council is determined to sack Nigel and Paul, who have long been thorns in management’s side.

Sefton’s chief executive, Graham Haywood, reportedly told union negotiators, “Nigel’s got to go — and if Paul is collateral damage, then so be it.”

At a lunchtime rally on Thursday of last week Nigel Flanagan told strikers, “I went round picket lines this morning and the council hadn’t even bothered opening many offices. But they ain’t seen nothing yet, because we can escalate this further.”

The workers were determined to continue their fight in the face of a sustained campaign of lies and vilification by managers.

One of the “complaints” concocted by the council was particularly disgraceful. It compared the behaviour on the DCH demonstration to the 1989 Hillsborough football stadium disaster in which 96 people died, many of them Liverpool fans.

Debbie Dickinson is one of the four union activists whose suspension was overturned.

She told Socialist Worker, “We are ordinary people who took part in a peaceful demonstration in our own time, just like when we went down to London for the anti-war marches.”

Debbie adds that the Sefton dispute has triggered a growing awareness within the workforce of the importance of trade unions and trade union rights.

“A lot of people didn’t realise that the union fought hard for the working conditions we have now. The dispute is educating people, making them realise that nothing’s been handed to us on a plate.”

Nigel Flanagan told Socialist Worker, “This is a political dispute in the purest sense. It’s essentially about our right to protest against housing stock transfer and privatisation.”

Nigel also called on trade unionists to support the ca mpaign to legalise solidarity action launched by Tony Woodley, general secretary of the T&G union, due to the Gate Gourmet dispute.

“To me our dispute is linked to the anti-union laws,” said Nigel. “Trade union rights and the rights of tenants go together. We need to legalise solidarity — that should be every trade unionist’s priority.”

One manual worker in the T&G union who had refused to cross the picket lines said, “The government is behind this, putting pressure on councils to privatise, telling people they’re better off in the private sector.

“They’re like Pontius Pilate, washing their hands of everything. This government seems to want to kick its own people in the teeth.”

Sefton Unison members will be meeting this week to discuss the next step in their campaign.