When you take on the bullies, they turn out to be cowards. That’s the lesson from a successful strike at Edinburgh College.

After a three-year pay freeze, management told lecturers that a pay rise would be conditional on giving up limits on weekly teaching time.

This could have meant a 56-hour week.

The EIS union branch voted for strikes by 92 percent on a 64 percent turnout. It called for

They were astounded when EIS branch negotiators refused to suspend action, saying, “But they called off the strike at Grangemouth once negotiations started!”

Two more days of solid strikes followed, after which management agreed to virtually all of the strikers’ demands.

Not only have conditions been protected, some lecturers have a 8 percent cut in teaching workload.

Over two years, pay for most lecturers will rise by 7 percent. The lowest paid will get 22 percent more.

The branch had 453 members before the strike. It is now 501 strong. The union is recommending that members accept the new offer in a ballot.

Our picket lines were larger and more lively with every day the strike went on.

Solidarity from support staff was brilliant. We put weight on from all the brownies they brought to us.

By the third day, members started to see how powerful we are as workers.

We received an amazing number of messages of support from around Britain as soon as our strike was reported in Socialist Worker.

Those messages and donations let us know that we were not alone and we could keep on striking until we won. 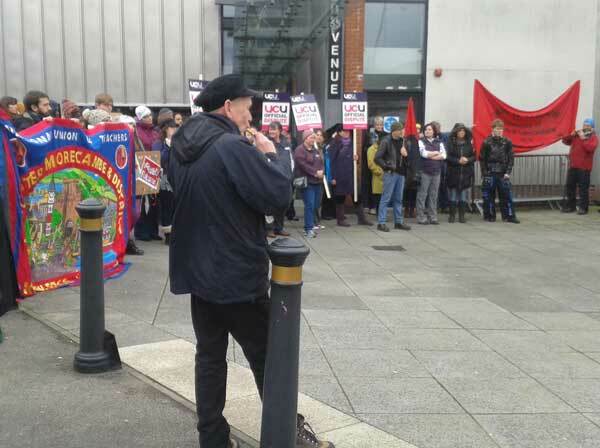