Strikers say no to redundancies

This article is over 18 years, 10 months old
SOME 59 NUT union members at Crofton School in Lewisham, south London, took strike action on Thursday of last week. They are fighting against the redundancies of three teachers on annual contracts at the school.
Downloading PDF. Please wait...
Saturday 05 July 2003

SOME 59 NUT union members at Crofton School in Lewisham, south London, took strike action on Thursday of last week. They are fighting against the redundancies of three teachers on annual contracts at the school.

Initially staff were told up to 11 teachers (one in seven of the teaching staff) could be made redundant because of the budget crisis. The Parents’ and Teachers’ Association was appalled and wrote letters to pressure the head and the governers.

The governors only narrowly voted to go ahead with redundancies. On the day of the strike the picket line was big and lively with support from other Lewisham schools. Strikers then went to Lewisham town centre. Many people enthusiastically signed a petition.

LEEDS NUT members are being balloted over strike action to defend jobs. More than 20 compulsory redundancy notices were issued to both teachers and support staff across Leeds primary schools. These job cuts are a result of ‘financial deficits’.

Since the ballot was announced, education chiefs have agreed to meet union negotiators weekly to try to reduce the number of job losses. This shows that just a hint of action will send employers scurrying back to the negotiating table.
Sally Kincaid

Victory for sacked cleaner - but the battle goes on 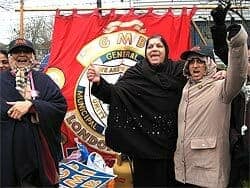