This article is over 9 years, 7 months old
Workers at two different parts of Amnesty International struck in London on Tuesday of this week.
By Dave Sewell
Downloading PDF. Please wait...
Tuesday 20 November 2012

Workers at two different parts of Amnesty International struck in London on Tuesday of this week.

Bosses want to make redundancies and tear up existing redundancy agreements. Many workers back the idea of restructuring aimed at employing more people in poorer countries. But the charity is disregarding the rights of its existing staff and their union, Unite.

“They are behaving like a big corporation, just outsourcing without thinking of the workers,” said Philip, a picket at Amnesty UK in Shoreditch, east London.

“People can see that we’re not just in it for the money, but the broader issue of fairness. So we’ve had a lot of quite strong, quite vocal support—it’s encouraging because we know we’re not alone.”

It is the third time in as many months that workers at Amnesty UK have struck against plans to make up to 40 redundancies.

And it’s the second strike day for workers at Amnesty’s international secretariat (IS) in Islington, north London. Workers there are fighting bosses’ refusal to respect existing agreements on redundancy.

IS staff have passed a vote of no confidence in Amnesty’s secretary general Salil Shetty. A regional programme director has resigned over the crisis.

Around 20 pickets there held candles and chanted Amnesty’s own slogan, “workers’ rights are human rights” while its global management met inside.

Back at Amnesty UK, Amnesty supporters have forced an Extraordinary General Meeting to be called for the new year. Compulsory redundancies are on hold until then.

“It gives us some very welcome breathing space,” said Unite rep Daniela Manske. “And it wouldn’t have happened without the strikes—that set alarm bells off for local Amnesty groups about how serious the situation is.” 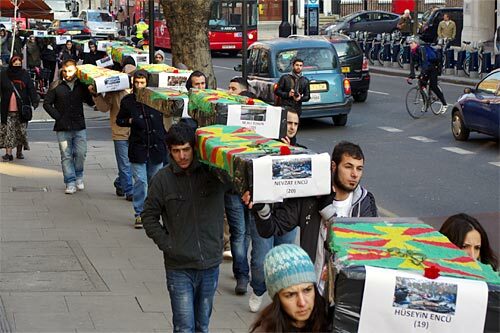