Strikes off as government retreats on pensions

This article is over 17 years, 3 months old
The threat of a strike by 1.25 million workers this Wednesday, escalating to involve others across the public sector, has forced a climbdown by the New Labour government over pensions.
Downloading PDF. Please wait...
Saturday 26 March 2005

The threat of a strike by 1.25 million workers this Wednesday, escalating to involve others across the public sector, has forced a climbdown by the New Labour government over pensions.

But the trade union leaders have missed a chance to secure an outright victory over a crucial issue.

The government had said its across the board attack on public sector pensions was set in stone. But deputy prime minister John Prescott wrote to local government unions on Friday of last week to say he would revoke changes to council workers’ pensions that were due to come in soon.

He is to set up a committee of the government, local authority employers and the unions to discuss changes to the pension scheme.

Pensions minister Alan Johnson wrote to the TUC on the same day. He offered fresh talks for unions across the various public sector schemes, where the government had planned to impose a rise in the pension age from 60 to 65.

Teaching union leaders were seeking confirmation this week that the offer included them.

Typical responses from activists to the deal were: “A success, but not a victory”, “A win, but the threat is still there”, “We’re one-nil up at half time, with a difficult second half”, “A battle won, but the war remains.”

Had the strike gone ahead, the government could have been forced into total retreat over pensions.

Most of the union leaders eagerly grabbed the first concessions on offer and called off the strikes because they did not want confrontation with Labour in the run-up to the election.

In the battles to come — over pensions and other issues — we need to build up the rank and file networks and the links between unions that developed in the last few weeks. 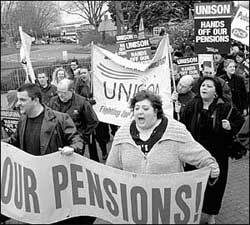 Prepare for pensions battles to come after the election

The bottom line in pensions talks with Prescott