Striking back against attacks on education

This article is over 11 years, 11 months old
Cadbury College Teachers at Cadbury College in Birmingham struck on Wednesday and Thursday of last week in a continuing dispute over restructuring.
By Sadie Robinson
Downloading PDF. Please wait...
Tuesday 13 July 2010

Teachers at Cadbury College in Birmingham struck on Wednesday and Thursday of last week in a continuing dispute over restructuring.

It was the third one-day strike for the workers, who are in the NUT, NASUWT and ATL unions.

The restructuring would downgrade jobs and cut teachers’ pay. Workers say the cuts would also threaten the quality of education.

Management recently made some concessions on pay, but workers are continuing their dispute because of concern about how the changes will damage education.

The unions have repeatedly asked for a meeting with the chair of governors, who is responsible for staffing, but he has refused. Parents have also signed a petition calling on him to meet the unions.

Lecturers at Croydon College were set to strike on Wednesday of this week over pay.

Lecturers say this will create a culture which shuns students who are less likely to get top grades.

“We want to see a pay scheme that encourages staff to do their best, not one that makes them live in fear of punishment.”

Lecturers at Manchester College and their supporters were to lobby councillors on Wednesday of this week in protest at attacks on their conditions.

Lecturers struck at the end of last month in protest at plans to impose a two-tier workforce at the college and impose different conditions for those who teach 14 to 19 year olds and those who teach adults.

Management wants to impose worse conditions on lecturers, including cuts in holiday and sick pay.

It has also derecognised their UCU union.

The lobby takes place from 9am on Wednesday 14 July at the town hall, Albert Square.

NUT union members at SEEVIC sixth form college in Benfleet, Essex, struck last Wednesday (pictured above). “Restructuring” will cost some staff up to £10,000 a year.

NUT rep John Mckay said ten staff had joined the union in the last week. This is the first strike since the college was set up in 1972.

Anti-Tory conference protest is a focus for resistance 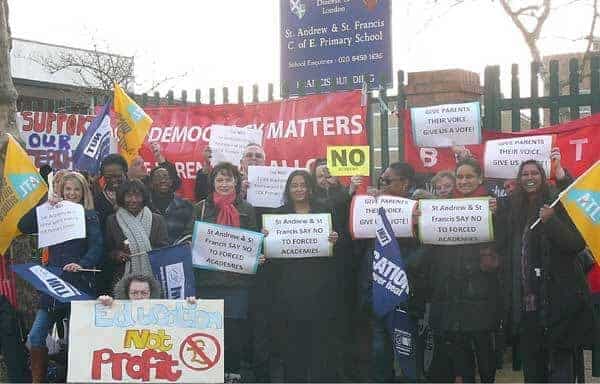 Teachers strike against academy plans for school in Brent