This article is over 14 years, 7 months old
Refuse workers in Salford were set to stage a 24 hour strike on Wednesday of this week in a dispute over the use of agency staff.
Downloading PDF. Please wait...
Tuesday 26 June 2007

Refuse workers in Salford were set to stage a 24 hour strike on Wednesday of this week in a dispute over the use of agency staff.

About 140 full-time refuse workers, recycling teams and road sweepers who are members of the Unite union, voted for a one day stoppage, a ban on overtime, and a work to rule.

The dispute stems from Salford council’s use of about 100 agency workers.

The workers are demanding an end to a two-tier pay structure for agency and staff workers.

When the dispute first erupted earlier this year the union condemned the practice of agency workers having to queue up for work in the early hours in a council yard.

This has since stopped and agency staff are now telephoned at home if they are required.

The union says that more than 100 agency workers are regularly used, and that 52 of them have been working for more than 12 months. A number have worked for over four years.

The union balloted members on the issue of filling permanent posts within cleansing services with casual labour.

Mick Cashman, senior organiser for Unite, said, “We have spent months trying to negotiate and workers feel that they are being ignored by their employer.

“All we are asking for is that the council honour our agreements on pay and conditions and end the casualisation of our jobs.

“It is wrong that workers work alongside each other doing identical jobs on different pay and conditions.

“We believe that this results in the exploitation of agency workers and the undermining of the pay and conditions for direct workers.” 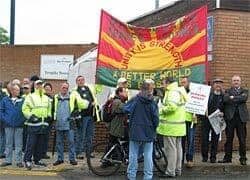