Teachers at Clifton primary school in Southall, west London, struck on Wednesday of last week against the sacking of three NUT union members.

Barbara told Socialist Worker, “Two of us are language support teachers—we work with children who need help with their English.

“We’re three of the most experienced teachers in the school. How is making us redundant going to make children’s education better?”

The council even wants to avoid paying redundancy compensation by pushing the three into unsuitable “alternative” posts.

It plans to replace them with unqualified assistants.

Around 30 parents came to a meeting the night before the strike and overwhelmingly supported the teachers.

Dozens have signed a petition calling for the three to be reinstated. 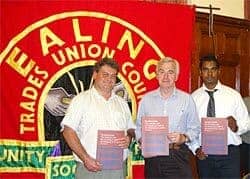