AFTER JUST 20 days of campaigning to keep our home open, the residents at St Andrew’s nurses’ home in east London have achieved an unprecedented success! Our campaign involved a protest outside the Department of Health, participation in the NUS student march through London, and marching with other protesters in Hackney.

We made a variety of television and radio appearances, and were supported greatly by the local press. Contact was made with local MPs who supported us and campaigned on our behalf. We also attended local meetings such as those in Poplar against council housing privatisation and in Dagenham against the closure of the Ford factory to offer our support to all involved.

Our efforts paid off. On Tuesday 28 November we received the news from the Department of Health that money was to be allocated to keep St Andrew’s nurses’ home open for a further two years, with funding for work on the building to bring it out of a state of disrepair.

The nursing students at St Andrew’s have achieved success in keeping our home open, and would like to support further action taken by students across London so that we can all receive decent and affordable accommodation. We believe that a difference can be made by all those willing to make the effort.

We would like to offer our thanks to Socialist Worker for the support we have received during our campaign.

No to the market in education

WE ARE writing on behalf of trade union members at Ducie High School in Manchester. Like many schools we face an increasing budget deficit coupled with and exacerbated by falling pupil numbers.

The Local Education Authority has insisted that something has to be done, and have proposed an option of the school becoming a city academy. A city academy is the latest attempt by this government to put the market into education.

As government publicity says, “City academies will be owned and run by sponsors…sponsors will be given considerable freedom over management structures and processes, and other features such as the length of the school day, term and year.”

We feel this is a serious threat not only to the conditions of staff, but also the quality and type of education offered to young people. We will have to remind this New Labour government of the need for a fully comprehensive state education system, and counter their insistence on driving the so called free market into education.

Blood on oil firm in Burma

YOU REPORTED last week on our protest at Exeter University against the chancellor, Lord Alexander, who is a non-executive director of the oil firm TotalFinaElf.

In 1988 the Burmese military crushed a pro-democracy uprising and massacred thousands of peaceful demonstrators. The Burmese military junta has since cleared the path for multinational oil companies to exploit slave labour and destroy the environment.

One of the largest deals the junta made was worth $650 million, in a deal involving Total in the Yetagun region. The military has cleared the people off their land, cleared the jungle, sunk mines and built roads. The result has been the loss of homes and livelihoods for many farmers and fishermen.

It is surprising to note that as well as his involvement with Total, Lord Alexander is also chair of the Council of Justice. This is the British section of the International Commission of Jurists, dedicated to human rights causes! Lord Alexander can rest assured that we will continue our protests until he resigns.

THE unidentified teacher who wrote to Socialist Worker two weeks ago complains Kevin Ovenden’s article “Pushed To The Bottom Of The Class” was “reactionary” and says that the claim that “schools are failing black children” is “racist claptrap”. Has he or she read David Gillborn and Heidi Mirza’s report, “Education Inequality”?

They begin by praising the efforts teachers have made to raise all pupils’ achievement, with limited resources and often in the face of official hostility. They also make the point that social class is the principal cause of educational inequality. However, there can be no escaping the fact of institutional racism in education. Recognition of this does not mean we should dismiss all teachers or schools as racist.

There is a fine anti-racist tradition among teachers. Addressing the inequalities identified in Gillborn and Mirza’s report will require a revival of the anti-racist initiatives which existed in the past in schools.

Thanks from the US

I AM an American living in Washington DC and have been reading your paper for three years. I am compelled to thank you for this refreshing publication. In a world of short sightedness and utter economic madness, this publication is a real inspiration. It is very important for people who see the devastation that capitalism is causing the world to know that they are not alone.

In the light of the current non-election this is an exciting time for us in the US. The next generation of Americans is beginning to wake up to the reality of corporate capitalism. This was demonstrated vividly by the number of votes Ralph Nader received, most of which came from people under the age of 26.

It finally seems that the two parties, both of which cater primarily to multinational corporate interests above all things, have begun to create the very opposition that will, hopefully, bring them down.

Standing up to the bigots

THE BIGOTS in the Precious Life organisation have been leafleting around central Scotland demanding an absolute end to sex education in schools. Precious Life neglected to consult a single school student about their “proposals”.

In contrast to their repressive campaign was the press conference held by pro-choice campaigners in Edinburgh. Myself and a fellow Scottish Socialist Party Youth member read statements written by a wide diversity of school students. Every one of these statements agreed that Precious Life was trying to deny us school students the basic human right of free, informed and intelligent choice.

Our press conference gained huge positive coverage on Scottish TV and radio, and in many Scottish papers. This proves that right wing bigots, no matter who they are attacking, can be successfully challenged.

SYLVIA Yolanda Mach (“Chris”) took part in the Prague S26 demo by filming it for a university project. She was arrested on the day and beaten by a group of policemen. She was repeatedly beaten in jail, had medical aid withheld, and was finally taken to a room and charged with assaulting a police officer!

She was so frightened that she jumped from the window of the third floor room, breaking her spine in the fall and damaging her leg for life. She is still in hospital and Christmas solidarity messages can be sent to Lorenz Bohler, Unfallkrankenhaus, Allgermeine Kranke, Wien, Austria.

NEARLY 400 delegates and observers attended the UNISON trade union’s black members conference in Southport last week. The conference agreed that rather than confronting the racism which is directed at asylum seekers, Jack Straw and New Labour policies have actually encouraged it.

The conference called on UNISON branches to set up local committees to defend asylum seekers, and to affiliate to the Committee to Defend Asylum Seekers and other campaigns. Delegates also agreed by a large majority to affiliate to the Anti Nazi League (ANL).

This should encourage every UNISON member to ensure their branch affiliates to the ANL.

Save the planet from disaster

THE MOST serious threat facing humankind is the destruction of the environment. The failure of the world climate conference is more evidence to prove capitalism is guilty. The world’s working class must stop supporting a political system which puts profit first. They must organise together to introduce a genuine world democracy.

We must put an end to the madness of this dog eat dog rat race, where the vested interests of nation-states competing against each other are destroying the planet. 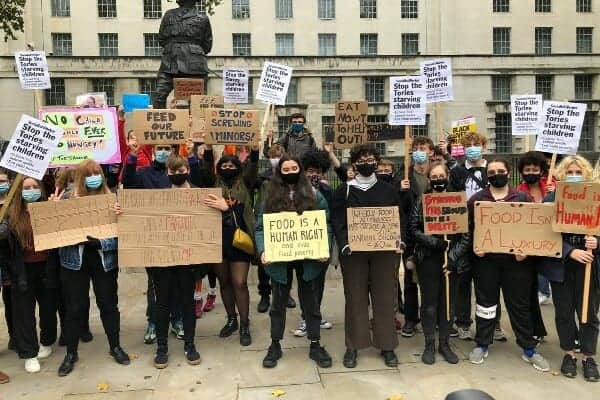