This article is over 12 years, 11 months old
Resistance to Israel’s aggression and its siege of Gaza has continued to rage on college campuses across Britain.
By Siân Ruddick
Downloading PDF. Please wait...
Tuesday 03 February 2009

Resistance to Israel’s aggression and its siege of Gaza has continued to rage on college campuses across Britain.

Students at many universities have occupied buildings in solidarity with the people of Gaza.

These have been some of the most militant and vibrant actions seen in universities for many years.

King’s College in London has been at the centre of this movement. The university, which is often seen as conservative, held the longest occupation of this recent movement – 12 days.

The students made a massive impact on their campus, holding rallies, press conferences and demonstrations in order to get their message out.

The occupation, which had involved hundreds of people, ended last Sunday.

They won seven out of their eight demands, with the unresolved one being the demand to revoke an honorary doctorate given by King’s to Israeli president Shimon Peres.

Campaigning is set to continue with King’s students petitioning the university to break its links with Peres.

Other occupations, most notably Soas, LSE and Oxford, also won many of their demands.

Bradford students occupied for 24 hours and had some of their demands met by management.

Students at Queen Mary’s university in east London have been in occupation since Tuesday of last week.

They were still in as Socialist Worker went to press.

Security guards at Nottingham university dragged students from the lecture theatre that they had been occupying for four days last Sunday.

This came after management had turned the power off over the weekend.

Sheffield Hallam students saw a similar response from their management.

The UCU lecturers’ union has passed a motion supporting the occupations.

The energy of this movement on the campuses is continuing to spread. Students have felt empowered by their recent successes.

This has proved that mass action and occupations are a way of winning demands on campus. 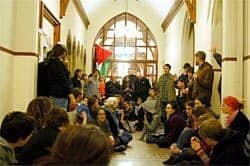