This article is over 11 years, 7 months old
Since the student protest on the day of the university fees vote, the media has been filled with panic about the "violence" of student "thugs".
Downloading PDF. Please wait...
Tuesday 14 December 2010

Since the student protest on the day of the university fees vote, the media has been filled with panic about the “violence” of student “thugs”.

But the police were the real thugs. They kept protesters kettled for hours in Parliament Square. They hit students and charged on horseback.

The cops dragged disabled protester Jody McIntyre out of his wheelchair, and whacked student Alfie Meadows so hard he needed brain surgery.

Julian Phillip is a Goldsmiths College student. He told Socialist Worker, “The police beat me on the head with a stick for no reason.”

Inside parliament, protected by riot police, MPs were voting to triple fees and wreck young people’s futures. The students were right to fight back against the state.

Paul Stephenson should be forced out—not because a few angry students got close to the royals, but because the cops nearly killed someone that day.

Rankin Maternity Unit: 'I'm still a red on this issue' 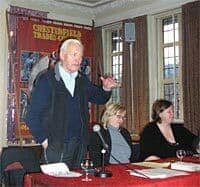