This article is over 12 years, 11 months old
The past week has seen the 27th occupation start on a university campus in as many days. For students across Britain, the first weeks of term in 2009 look set to shape the politics on campus for many months to come.
By Siân Ruddick
Downloading PDF. Please wait...
Tuesday 10 February 2009

The past week has seen the 27th occupation start on a university campus in as many days. For students across Britain, the first weeks of term in 2009 look set to shape the politics on campus for many months to come.

New occupations are a testament to the energy and radicalism of the people involved – and their politics.

Students at Manchester university have taken part in several occupations.

Sundara Jerome, a student at Manchester, told Socialist Worker, “There are so many new people involved, people who have never done anything political before, or thought it was a good cause but stood on the sidelines.”

The university has been a hive of activity since Wednesday of last week. Activists called a student union emergency general meeting (EGM) to vote on a motion supporting the Palestinians.

When this was blocked by union bureaucrats, hundreds of students then occupied part of an administration building containing the vice chancellor’s office.

After more anti-war demonstrators were prevented from joining the occupying students, a new occupation was initiated on Friday night. This has now become home to all the students involved in the activities.

Occupying students have faced harassment and intimidation, with the police being called onto campus several times throughout the action.

Management initially refused to let students return to the occupation if they left to get food and water.

These tactics are a clear break from the negotiations that other university managements have had with their students in occupation.

Despite phone calls, emails and letters of protest, the university’s vice chancellor has so far refused to respond.

Occupations elsewhere have won victories. Students at Strathclyde university went into occupation for 24 hours on Wednesday of last week.

They won massive successes – the university will now provide scholarships for Palestinian students and publicise and support the Disasters Emergency Committee (DEC) appeal for Gaza.

Students at Glasgow university are the latest to go into occupation. They went in on Monday this week after a series of anti-war activities.

These included gathering almost 1,000 signatures on a petition to give to the principal demanding that the university supports the DEC appeal, that it divests any shares it holds in the arms trade and terminates research contracts and grants with arms companies.

The principal has so far refused to recognise the occupation and won’t meet with the students.

Raymie Kiernan, a student at Glasgow, spoke to Socialist Worker from the occupation. He said, “The mood is really strong here. This university has a right wing legacy but we’re changing that, as all the other occupations have done.

“There are people on the roof of our building right now, with Palestinian flags and megaphones to get people to the demo we’re having on campus today. More and more people are getting involved.”

Activity has also continued outside of the occupations. Essex university students have made massive gains since their occupation. They’ve had some of the biggest student general meetings on campus for years.

The student union has passed motions to support all the other occupations around Britain and has removed all Israeli goods from student union shops.

Dominic Kavakeb, president of the student union at Essex, told Socialist Worker, “People want to get involved and the level of debate is so high.

Students in Britain were also excited to hear of occupations in the US. Over 75 students at the University of Rochester in New York occupied on Friday of this week.

They declared victory after nine hours when the university administration agreed to several of their key demands.

Meanwhile, the Stop the War Coalition held an activist meeting for students from across Britain last Saturday.

Over 120 students from 29 colleges met to discuss the way forward.

The meeting produced a charter of five demands based on the common demands of the occupations.

They included demanding that universities withdraw all investment in the arms trade and create scholarships for Palestinian students.

As Israel continues to lay siege to the people of Gaza, students must continue to build the resistance on campus.

For longer reports go to » Gaza occupation grows at Manchester University, » Scottish students solidarity with Gaza and » Statement of support for student occupations over Gaza from members of the UCU union NEC 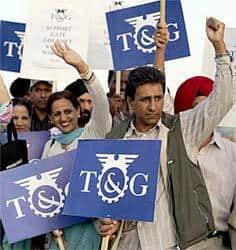 British Airways: A ballot… but not yet