Students forced out of education into poverty

This article is over 11 years, 9 months old
The Tory cuts are tearing into the futures of young people.
Downloading PDF. Please wait...
Tuesday 26 October 2010

The Tory cuts are tearing into the futures of young people.

The Education Maintenance Allowance (EMA) was one of the many casualties of chancellor George Osborne’s assault last week. EMA is the payment of up to £30 a week made to more than 600,000 students aged 16 to 19 from lower income families.

Students have to fill stringent criteria to get the payment each week. They must have 100 percent attendance to a week’s classes in order to get the grant.

For many young people—and their families—EMA is the difference between being able to stay in education and joining the queue for low paid, insecure jobs at the age of 16.

The Tories want to take it away and replace it with a “targeted” fund that costs less than one tenth of EMA.

Osborne and David Cameron’s cynical calculation is that youth unemployment at over 20 percent will be enough to keep people at school or further education college.

It will cost tens of thousands to go to university, and if you do get to college there will be too few staff and too much overcrowding.

Universities face a stunning £4.2 billion cut in funding—40 percent over four years—and students will be confronted with a huge rise in tuition fees.

Students from poorer backgrounds will be excluded from universities by the prospect of mountains of debt they will never be able to pay off, along with additional costs such as accommodation.

Students—from schools to FEs to colleges and universities—need to organise and fight against the cuts and the pro-market education ideology that lies behind them.

This Sunday will see hundreds of students and lecturers come together for the Education Activist Network conference.

And on Wednesday 10 November thousands will march through the streets of London on a demonstration called by the National Union of Students and the lecturers UCU union against the attacks on education.

These two events are vital components for a movement to stop the Tories turning the clock back to a more elitist system. 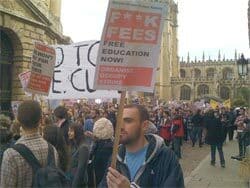