Most of what happened was the result of independent organisation, not “official” protest from the NUS.

In the morning students walked out of schools and colleges to join the protests. Students occupying their universities sent delegations to join the march.

At a rally before the march set off, messages of solidarity from workers in the UCU lecturers’ union, the RMT transport union and the Communication Workers Union raised huge cheers from students—the biggest when a lecturer raised the call for a general strike.

Enraged and determined, the students marched through London in their tens of thousands—repeatedly attempting to break through police lines, rushing down side streets, determined to reach parliament.

Demonstrators chanted, “We hate Tories” and “Shame on you” and people came out of shops and workplaces to cheer the students on.

The police had said protesters would not be allowed into Parliament Square, but students surged in, getting close to the House of Commons. The police began to “kettle” people then tore into them. They started with baton charges then galloped in on horseback.

Students launched themselves at police lines and barriers, and tore down the fencing around the grass in Parliament Square.

The police were forced to retreat behind barricades as the students occupied Parliament Square and the surrounding streets. Students repeatedly tried to break through police lines to reach parliament.

A number of protesters had megaphones and organised impromptu discussions and chanting.

Others had sound systems and hundreds danced and waved placards in defiance.

A student from Manchester had her collar bone broken by police. Her friend from Cambridge was nearby with her bag splattered with blood.

But people remained defiant, some fighting back to defend themselves and their comrades.

A group of around 150 students, furious at being stopped from joining the protest outside parliament, occupied the National Gallery at Trafalgar Square, others set off to march through central London.

In the evening protesters attacked the Treasury and the Supreme Court, and fought running battles with the police.

The Royal car containing Charles and Camilla was confronted in Regent Street!

Groups of trade unionists joined the protest throughout the day. The UCU lecturers’ union held a rally as MPs voted on the plan, many also joined the students against police violence and kettling.

There were banners and delegations from the RMT, UCU, Unite, GMB, CWU and Unite unions.

Other demonstrations took place in Newcastle. Swansea, Brighton, Glasgow, Edinburgh and other towns and cities. 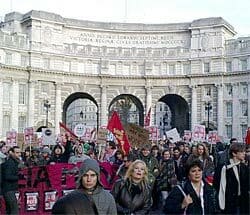 Video of students and police in London on Day X3, 9 December