This article is over 15 years, 3 months old
Students will converge on London this Sunday for a national demonstration against Labour’s higher education policies.
Downloading PDF. Please wait...
Saturday 28 October 2006

Students will converge on London this Sunday for a national demonstration against Labour’s higher education policies.

The protest, called by the National Union of Students (NUS), will oppose soaring levels of student debt, attempts by the government to lift the cap on its £3,000 a year top-up fees and the drive to embed the market deeper into education.

Tens of thousands of students were expected to attend. The mobilisation was given added urgency last week when the Universities and Colleges Admissions Service released figures showing a decrease of 3.7 percent – or 15,163 students – in the numbers taking up university places.

The NUS and the lecturers’ UCU union blamed the fall on the introduction of university top-up fees of up to £3,000, which came into effect at the start of the academic year.

Anna Bogdanova, a student at Warwick university, is part of its organising committee building for the demonstration. She told Socialist Worker, “We’re hoping to bring four coachloads of students.

“The demo can bring students together and show that individuals are not isolated in opposing attempts to raise the cap on top-up fees.

“Maybe this will lead on from a campaign over top-up fees to become a campaign demanding free education.”

Sian Ruddick is a student at Swansea university. She said, “There has been a real change of mood on campus this year.

“There’s a meeting this week to put forward the arguments over education funding. It is hosted by the student union and I’ve been invited to speak as a Respect representative.

“This is the first time in years that the number of students going to university has fallen. The government says you can pay back £9,000 once you graduate. But that just doesn’t seem like an option for many working class students.” 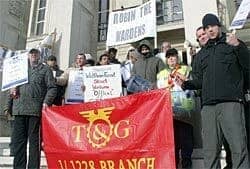