University bosses are attempting to use the courts, police and disciplinary measures to clamp down on student protest.

At the management suspended five students for their involvement in a week-long occupation in solidarity with a national strike of staff on Tuesday of this week.

A 400-strong demonstration was organised on the university campus yesterday, Thursday, demanding the reinstatement of the “Sussex Five”.

She said, “Management have accused us of violence and criminal damage. They say the five students are ‘ringleaders’ and ‘disruptive’.

“They’re saying that to justify trying to scare students away from protesting. It’s not true, the occupation was totally peaceful.

“This isn’t just about privatisation anymore, it’s also about intimidation by management and police. We have won reinstatement before by continuing to protest and that’s what we’re going to do.”

Abbie Manning is also a student occupier. She told Socialist Worker, “Management are trying to break the unity between the students and staff who are all affected by their privatisation. The suspensions are absolutely outrageous.”

students have launched a solidarity campaign for the five. In less than two days over 6,500 have signed an online petition demanding they be reinstated. And solidarity has poured in from local council workers, university unions, and from students around the world.

Peter Hain MP has given his support. He said, “As a former student I am astonished at the University’s attack on the right to peaceful protest, so betraying its whole mission. These suspensions must be reversed immediately.”

Over 200 students were protesting as this article went live. Another demo is planned for Monday of next week before a mass meeting of the student union debates motions calling for a student strike the following day and a vote of no confidence in the university vice chancellor.

And over 300 students from different colleges at the protested yesterday against cops on campus. It followed a violent eviction by police of an occupation of the university’s Senate House building the night before.

There was anger at the university management’s attempts to clamp down on dissent on campus and a deep sense of solidarity between students and workers across the university.

One Queen Mary student told Socialist Worker, “I’m here to protest against police brutality and the privatisation of education. Solidarity is important and, as a student of history, I understand how important it is to protest.

Aaron Berman, a university student, said, “I’m here today because the cops have no place on campus. I’m also angry at the police shooting of Mark Duggan. We have to defend our right to protest.”

Nadje Al-Ali is the SOAS UCU lecturer’s union president. She told Socialist Worker, “What happened yesterday was a disproportionate violent crackdown on peaceful protest. Students supported our strike this week – now it’s our turn to support them.”

The protest marched around different London campuses in Bloomsbury, central London, but it was not long before 13 police vans turned up to harass and attack the demonstration.

Students were simply asserting their right to protest on their own campus.

Police ended the day by arresting 36 people for protesting against the police arresting and attacking students the day before.

Around 70 students and young workers held a protest on campus in solidarity with and students.

Another protest was set to take place at the student union (ULU) today, Friday, at 3pm in response to the police crackdown.

The following statement in defence of the students was put out by university workers.  Please sign and circulate it as widely as possible http://www.ipetitions.com/petition/defend-right-to-protest-uni-of-london
Topics Police, Students

Clampdown on campus is an attack on protest rights 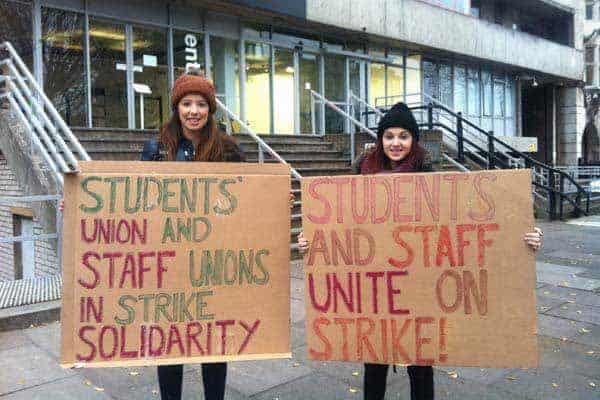