Campaigners handed out leaflets and collected signatures for a new petition calling for the family to be allowed to stay in Bolton.

The Sukula family – mother Ngiedi Lusukumu, father Kiala Sukula and their children – fled to Britain from the Democratic Republic of the Congo after the family were targeted by Congolese government militia.

They have been living with the stress of deportation threats since the home office rejected their asylum claim and their National Asylum Support Service (NASS) support was withdrawn in August last year. They are threatened under the trial run of Section 9 of the Immigration and Asylum Act.

Section 9 rules that rejected asylum seekers who refuse to take ‘reasonable steps’ to leave the UK ‘voluntarily’ will lose entitlement to benefits and housing. Once destitute, their children can be taken into care.

Campaign chair Jason Travis said the family were about to present a new claim to the home office in support of their bid.

He said, ‘This fresh claim is going in very soon with new evidence of the deteriorating situation in the Congo, the educational needs of the Sukula children and for the first time, Flores and Daniel, the eldest children, will give their evidence of what happened to them in the Congo.’

Flores Sukula said, ‘We’re here in the town square today because we’ve been fighting for a year to stay and to show people that we are still fighting.’

Justice for Julian Webster - protest this Friday, 21 May

They slashed this refugee's throat 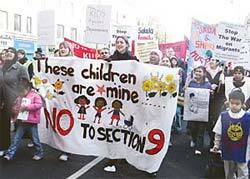