This article is over 13 years, 11 months old
Campaigners up and down the country are mobilising for the national demonstration in London on Saturday 21 June against the fascist British National Party (BNP).
Downloading PDF. Please wait...
Tuesday 10 June 2008

Campaigners up and down the country are mobilising for the national demonstration in London on Saturday 21 June against the fascist British National Party (BNP).

The protest has been called by Unite Against Fascism (UAF) and Love Music Hate Racism (LMHR) in response to the Nazi threat. The BNP holds around 60 council seats and took a place on the London assembly in the 1 May elections.

Trade unions are giving strong support to the demonstration, with the Unite union sending out leaflets to every one of its two million members encouraging them to attend.

Steve Coghlan is a member of the NUT teachers’ union in Luton who has been helping to build for the demo.

‘Last week the Luton NUT branch voted at a 17-strong meeting to give £200 to support a coach going from the town to the London demonstration,’ he told Socialist Worker.

Dave Jones, the political officer of the Wolverhampton CWU union, told Socialist Worker, ‘Wolverhampton is a diverse city but there is some support for the BNP, which my union is determined to challenge. We are solid behind Unite Against Fascism.

‘My branch has a proud anti-racist history. A few years ago 1,200 people at our mail centre took strike action against racism. That kind of policy has helped breakdown barriers between people and set an example of racial unity.’

In Glasgow activists have been holding weekly busking sessions in the city centre to raise awareness and funds for the anti-fascist cause.

‘We’ve been running UAF stalls and then we came up with the idea of busking against the Nazis,’ says Phemie Matheson, an art student and LMHR activist in Glasgow.

‘We’ve raised about £160 so far towards getting a coach down from Glasgow to the demonstration. We’ve also collected loads of signatures and contact numbers.

‘The BNP tried to sell its papers in Glasgow city centre about a month ago. But when people realised who it was a big mob of people surrounded them saying we don’t want you here.

‘Eventually the BNP members got led away by the police. The BNP is not welcome in Glasgow.’ 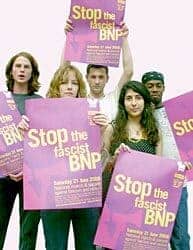 Grassroots revolt that can stop the Nazi BNP in Rotherham