This article is over 12 years, 2 months old
The truth about the British Airways strike
Downloading PDF. Please wait...
Tuesday 25 May 2010

The dispute is not about saving money. It is about union-busting.

BA boss Willie Walsh has had 15 months to resolve this dispute. The Unite union has put forward several offers to BA. Walsh has refused every single one.

BA has imposed job cuts on workers. Walsh wants to attack pay and renegotiate all of workers’ existing terms and conditions.

Walsh’s ultimate aim is to bring in the “new fleet”. This new group of cabin crew would be employed on lower pay and worse conditions.

Smashing the union is a key element of ramming these attacks through.

Civil Aviation Authority figures show that cabin crew wages fell by over 4 percent in real terms between 2001 and 2008.

BA cabin crew do earn more than some crew working for other airlines. But why should all workers’ pay be brought down to the lowest level while the bosses carry on raking it in?

We should fight for decent wages for all—and resist the bosses’ race to the bottom.

Walsh is a bully

BA has suspended more than 50 crew on trumped up “charges”. Seven have been sacked. They include leading union reps.

Walsh has vindictively removed strikers’staff travel discount—which is crucial for some people to get to work. Around 12 percent of BA cabin crew live outside Britain.

There is no financial argument for BA to remove staff travel—workers only get seats if they are empty. Instead it is further evidence of the real agenda behind this dispute. Walsh wants to make life so unbearable for crew that they leave BA—and he can bring in his cheaper replacements.

BA made a profit

BA says it has made a pre-tax loss of £531 million. In some areas, BA’s revenue is down but overall the company is making money.

It made a net profit of £182 million in the year up until 31 March 2010—largely through gambling on the money markets.

The company chose this dispute because it wants to smash the workforce.

Project Columbus, detailing BA’s plans to attack workers and introduce the “new fleet”, was leaked to the press in June 2008.

Walsh received a 6 percent pay rise and an extra £90,000 in his pension pot the same year.

A fight for us all

Everyone is watching the BA dispute.

The rich in the City hope that Walsh will smash cabin crew—and give bosses everywhere the green light to go on the offensive.

BA workers are on the frontline of class struggle.

If they push back one of the nastiest bosses in Britain, workers everywhere will cheer.

“If we go down, all the unions in this country will be fucked,” said one BA worker. “To other workers I’d say, just think—what if this was happening to me?

“If Walsh gets away with it at BA, it could be you next.

“But if we win it will show workers don’t have to pay for the crisis—and boost the fight against the cuts.” 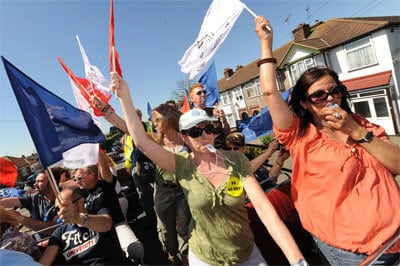