Workers at the National Gallery in London have announced their second five-day walkout against privatisation.

They are fighting for their working conditions and for a public service.

Bosses want to privatise 400 out of 600 jobs. They have also backed off from promises to pay the London Living Wage, meaning that the gallery is the only one in London that doesn’t pay it.

Workers struck for five days earlier this month over the plans. Bosses suspended PCS union rep Candy Udwin on the eve of the strike in an attempt to undermine the action.

But it’s made workers more determined to fight back.

She said, “I can’t speak about what has happened to me but if it was intended to scare staff it has backfired.

“There has been a fantastic feeling of solidarity among the strikers.”

Serwotka said that workers could win, and that gallery bosses’ attacks on Candy were “trumped up charges of the worst order”.

Guardian newspaper columnist Polly Toynbee said, “I think you will win. I have had a bigger response from readers to this than many other issues.”

Support is pouring in for Candy from trade unionists and campaigners—with thousands signing a petition calling for her reinstatement.

Workers at the Ritzy cinema and the Dulwich Picture Gallery were among those at the public rally in parliament, as were artists Bob and Roberta Smith.

Workers are having pictures taken with “Reinstate Candy” posters to demonstrate their support.

Members of the firefighters’ FBU union posed with the signs at their recall conference last week.

And Candy was warmly received when she spoke at a rally in London last Sunday in solidarity with Greece.

Strikers are calling on people to visit the picket lines from 9-11am. There will be strike meetings from 11am each day.

Strikers plan to march and rally on a national day of action on Thursday of next week.

As Candy said, “The nationwide solidarity makes us believe we can win.

“But it should also give everyone heart to see how much backing there is for anyone who stands up against privatisation, cuts and the austerity policies of this government.”

Invite speakers from the dispute into your union branch or campaign meeting. Email [email protected]

Ask your MP to support the campaign and back Early Day Motion 300 bit.ly/1Jn6AtA 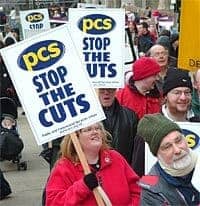 Fighting for jobs and services in the civil service 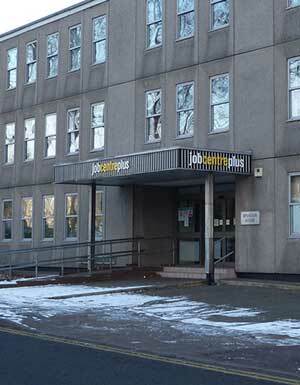 Urgent call to save ‘lifeline’ in job centres