‘Surgery factories’ to be run for profit

Like its plans for foundation hospitals, the DTCs, dubbed ‘surgery factories’, are a huge step towards the privatisation of the NHS and a two-tier system. One firm involved is US-led consortium Nations Healthcare, which includes US health firms like Same Day Surgery and British companies Reed Associates and MIA Lodestone. Another is Care UK Afrox, a joint venture between Care UK, one of the biggest companies running private elderly care homes in Britain, and a South African firm.

The DTCs will do 135,000 private operations a year and 115,000 transferred from NHS hospitals. And the government will pay these vultures more than the NHS gets for operations. They will be able to poach nurses and other NHS staff. Up to 70 percent of staff in the new centres will come from the NHS.

Karen Jennings from the Unison union said, ‘It is a disgrace that NHS nurses may be made redundant and NHS wards close because the government have handed over these lucrative new contracts to global interests.’ And James Johnson, chair of the British Medical Association, said, ‘Far from increasing capacity in the system, these new DTCs may remove critical staff from existing hospitals and patient care will suffer.’

Health secretary John Reid claims the centres will not mean privatisation. That is a lie. As former health secretary Frank Dobson put it, ‘The government has lost the plot. This government initiative means that these foreign companies are to cherry-pick the profitable end of the business, leaving the NHS with the rest.’

CONSULTANTS AT the Oxford Eye Hospital have been resisting the government’s attempt to make it send up to 1,000 eye patients to private sector treatment centres. They say it will be ‘disastrous’ if the government forces them to hand over one third of its 3,500 cataract operations to a private contractor, leading to the closure of clinics and decimation of the training of new eye specialists.

THE INVESTIGATION into the deaths of four soldiers at the Deepcut barracks in Surrey has been rocked by new revelations. Geoff Gray, the father of one of the soldiers, told Socialist Worker, ‘We were told right from the beginning that there would be no Ministry of Defence (MoD) involvement in the investigation. It has now transpired that two MoD officers have been put on all four cases. Adam Ingram, the armed forces minister, said in parliament last year that there would be no MoD involvement in the Surrey police investigations. They’ve gone against that. It has undermined the whole investigation. We were supposed to have a briefing with the chief of Surrey police on Monday of last week. He cancelled it at the last minute because of ‘press interest’. I think the real reason they cancelled the meeting was because they would have had to tell us of the MoD involvement. They haven’t got their story sorted out yet so they cancelled the meeting. I’m hoping that we’ll have the meeting on Friday of this week.’

James Collinson, Geoff Gray, Cheryl James and Sean Benton were all found dead in suspicious circumstances at the Deepcut barracks. One of the Surrey detectives working on the case has resigned over allegations of inappropriate behaviour towards female witnesses.

‘What we need now is a full public inquiry with the families, the police, the army and journalists all called to give evidence,’ says Geoff Gray.

The only choice is yes

NEARLY THREE million workers who work over 48 hours a week have not signed an opt-out from the working time rules. These rules are supposed to limit working hours to 48 per week. And 350,000 workers who have signed the opt-out were given absolutely no choice by their bosses. The figures are contained in a new survey by the Trades Union Congress.

It found that one in four people who had signed an opt-out from the rules had no choice about it. Chief of the bosses’ CBI organisation Digby Jones, who spoke at the TUC last week, responded with contempt: ‘What gives the TUC the right to interfere with the freedom of choice of the individual?’

No good reason to rejoin Labour 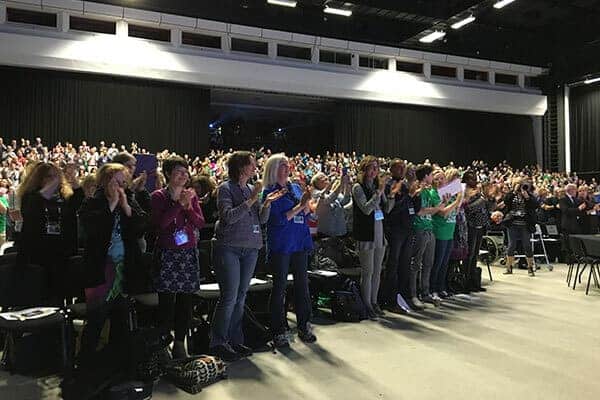