Students occupying a building of Sussex university have called a demonstration on Thursday of this week, following two successful protests last week.

“We want as many people to come down as possible,” said second year student Lewis Nielson, who has been involved in the sit-in from the start two weeks ago.

The occupation is part of a campaign against the privatisation of 235 jobs, including cleaners and security guards.

It has gathered wide ranging support—from author Will Self to local MP Caroline Lucas as well as hundreds of students, lecturers and campaigners.

Comedian Josie Long is set to perform there on Wednesday of this week, and on Friday of last week 150 people joined a protest at just 24 hours notice.

“The whole process is really amazing and it gives you a real sense of what the collective can do,” Lewis told Socialist Worker.

“We have teams and working groups for everything that needs organising—food, security, people who work directly building links with staff.

“Every day we have two or three meetings where everyone comes together.

“No big decisions are made without everyone’s input, and the majority vote wins.”

Similar privatisation at other universities has led to attacks on workers’ pay and conditions.

“Last week management held meetings with staff,” said Lewis. “They set it up as a one hour lecture with slides.

“Some of us went in and disrupted it, asking management difficult questions about their plans.

“This got loads of support from the workers in the room.

“People said that it was the best meeting they’d had because management were put on the spot.”

Lewis said that a demonstration on Tuesday of last week “transformed the atmosphere”.

More than 400 supporters managed to push aside specially hired security guards and break the blockade of the occupation.

“It was a brilliant moment,” said Lewis “It was just too big for them to be able to control.

“Management hate us, we’re a visible symbol of opposition to their plans. Now we need the workers to take action too.” 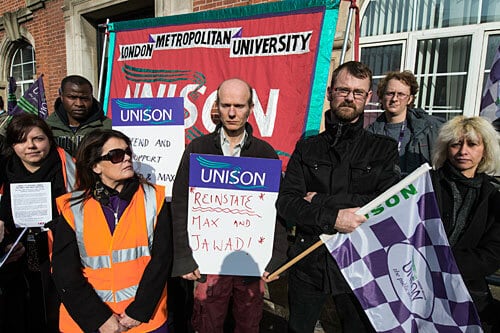 Birmingham lecturers vote to walk out