The T&G union held a Polish language meeting in Glasgow for the first time last Sunday.

Held for Polish workers and their families at the union’s Scottish head office, it was a big success. It brought together around 200 members of the local Polish community to raise and discuss the issues and concerns they are facing while working and living in Glasgow.

Over 33,000 migrant workers are registered in Scotland and the numbers are growing. The majority of them are Polish and many are keen to join a union.

Recently the T&G has won a number of cases on behalf of Polish workers who were in dispute with their employers or had their legal rights violated.

Among the problems being uncovered are abuse of tenancy rights with workers being evicted on termination of employment, extreme hours, infringements of rights to wage slips, lack of paid holidays, no sick pay and notice, and illegal deductions from wages.

Mike Brider, Scottish secretary of the T&G, began the meeting with a minute’s silence for Angelika Kluk, the Polish student who was murdered in Glasgow.

He opened the meeting by saying, “T&G Scotland warmly welcomes the role and contribution which migrant workers are making to our economy and communities.

“However, we have become increasingly concerned about the violation of migrant workers’ rights within and outwith the workplace. This will be the first of a series of regular meetings in the Polish language to provide information and support for the community.”

To its credit the union is taking immigrant workers seriously. It produced leaflets and advice packs and conducted the meeting in Polish. Significantly the meeting was attended by Labour MPs Gavin Strang and Ann McKechin, and by Labour MSP Pauline McNeill.

Many Polish workers arriving in Scotland bring with them a tradition of trade unionism.

A woman shop steward from a local meat factory explained how management had hoped that a new intake of Polish workers might divide the workforce. Then she told the meeting how the Poles had enthusiastically joined the union to take part in an overtime ban which cut hours and won a pay rise. 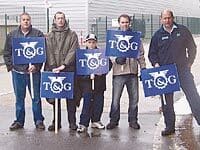