Take on the real enemy together

Take on the real enemy together

THE ERUPTION of racism in Burnley is frightening. It follows large votes for the Nazi British National Party (BNP) in both Burnley and Oldham. The pattern of events in both towns is strikingly similar. Groups of white people, some dozens strong, attempt to storm into a mainly Asian area. They hurl racist abuse.

The police do little or nothing to stop them. So Asian people defend themselves. Belatedly the police arrive in force, turning ferociously on those who are fighting back. Then the media talks of “criminality” and “race riots” as if there were no difference between the victim and the victimiser.

The reality in both towns is that a tiny core of racist thugs, organised by the BNP, has tried to direct the bitterness white people feel at poverty and deprivation into attacks on Asians. Burnley, Oldham and many other areas have been devastated by the destruction of textile and manufacturing industry.

Many of the jobs that are now available pay poverty wages and drain the life out of people. Places like these are systematically ignored by New Labour. Jack Straw contemptuously claimed that the unprecedented fall in the numbers voting in these working class areas was due to people feeling “contented”. Local politicians have no answers either. Some resort to setting one group against another to cover for their cowardly refusal to struggle for extra resources.

The government is playing the same divisive game. It told the people of Oldham this month that there would be no new cash. Instead it would redirect paltry funds from poverty-stricken Asians to poverty-stricken whites.

That fed the myth that Asian people are living it up at the expense of white people. Yet all the evidence shows that the vast majority of Asians are even worse off than white working class people. The problem is not “mistaken perceptions” among different ethnic groups. It is a filthy system, defended by the mainstream parties, which is pitting the poorest people against one another.

Everyone appalled by this needs to act urgently. We need to stand in solidarity with the Asian people who are under attack. Self defence against the racist thugs is no offence. Racism is a poison that undermines the interests of all working people. And when Shahid Malik, a member of Labour’s national executive, is beaten senseless by the police, who can say Asian youth should rely on those same police to protect them?

But we must do far more. We must build the kind of united working class struggle that can provide genuine answers to the despair people face. That means a fight against the job losses that are accelerating across Britain. It means a fight for decent housing. As Burnley’s Labour MP Peter Pike said this week, “Burnley’s housing needs 150 million. The government has given 3 million in the latest regeneration budget.”

Socialists have to be at the heart of every battle to improve workers’ lives, drawing in white, black and Asian people, and arguing against any attempt to divide us. Organised racists can be checked everywhere and their footholds broken in Burnley and Oldham. 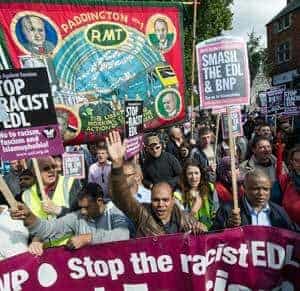