This article is over 12 years, 8 months old
Teachers at five schools in Tamworth, Staffordshire, have voted to take strike action against a planned academy.
Downloading PDF. Please wait...
Tuesday 12 May 2009

Teachers at five schools in Tamworth, Staffordshire, have voted to take strike action against a planned academy.

NASUWT union members at all schools except Queen Elizabeth Mercian School will also join the strike.

Rob Kelsall, regional officer for the NUT, told Socialist Worker, “We won’t let the council off the hook at this stage. Our members are absolutely up for taking action.”

The Labour-led Staffordshire council plans to transform Woodhouse High School into an academy and to create a single “post-16 centre” for the entire borough, which will affect all of the schools’ sixth forms and jobs.

The Hands Off Tamworth Schools (HOTS) group is backing the action. 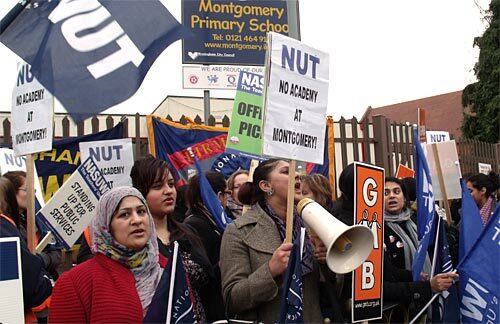 Strikers have the power to save Birmingham school