This article is over 13 years, 11 months old
Britain could see its first national teachers’ strike in over 20 years after the National Union of Teachers (NUT) called a ballot for a one-day national strike over pay.
By Sadie Robinson
Downloading PDF. Please wait...
Tuesday 29 January 2008

Britain could see its first national teachers’ strike in over 20 years after the National Union of Teachers (NUT) called a ballot for a one-day national strike over pay.

Further education lecturers in the UCU union, who are also fighting a below-inflation pay offer, will be balloting for action alongside them.

If the ballots are successful, both unions would strike on Thursday 24 April.

The threat of national strike action comes in the context of a serious attack on the pay of all workers across the public sector, as Gordon Brown tries to impose a below-inflation three year pay deal.

Teachers have reacted with fury to the offer. Christine Carruthers, an NUT rep in Northumberland, told Socialist Worker, “Teachers in my school thought the offer was ridiculous. People are very angry about it.”

Ken Muller is a school rep at Islington Green School in north London.

He told Socialist Worker, “People are angry that they are expected to pay for rising inflation when they aren’t the ones causing it.

“The fact that the pay offer is for three years – during which time inflation could rocket – adds to the anger.

“Younger teachers in particular are already struggling to cope. They are repaying student loans, which add interest at the rate of inflation, yet their pay in real terms will be cut.

“Our union meeting on Friday of last week unanimously rejected the offer.”

The pay offer is the last straw for many teachers who are angry over a number of issues in schools.

Tom Woodcock, the vice president of Cambridgeshire NUT and a candidate in the upcoming NUT national executive elections, said, “Teachers are angry about all sorts of things – workload, bureaucracy, class sizes and the marketisation of education.

“Pay is the issue that can bring people together.

“The cost of housing is a real issue, especially for younger teachers, and the pay offer just feels like a slap in the face.”

Teachers are now campaigning to get a big yes vote in the ballot, which will begin on 28 February and end on 31 March.

Teachers will be organising pay rallies, setting up strike committees and organising delegations to visit schools where the union is less well organised.

Activists are hopeful that the campaign to build a yes vote will have a wider impact on the union.

Barry Conway, secretary of Bolton NUT, told Socialist Worker, “This is an exciting time for activists – we have a window of opportunity to locate activists and build networks that will be around for a long time.

“The key is to get the vote out.

“In Bolton we’re planning a delegate meeting to bring together reps and teachers from other schools to answer questions about the ballot and organise for the strike.

“We need to make sure we support schools that are smaller and less confident.

“There will be lots of younger teachers who have never been on strike before – we need to go through the nuts and bolts of going on strike.”

James Dean, an NUT rep in Saltaire, Bradford, told Socialist Worker, “We need to make sure that we have a strategy of how to organise the strike and stress to newer teachers that strike action can make a difference.”

Tom agrees. “The timescale of the ballot means we have the time to get out to other schools and speak to people,” he said.

“In Cambridge we’ve already started this and will be doing more over the next week.

“This is about rebuilding and creating a new layer of union activists.”

In the colleges, UCU activists are also planning their campaign for a yes vote.

Sean Vernell, a member of the UCU national executive, spoke to Socialist Worker. He said, “Throughout February we’ll be organising to send members of the national executive into union meetings to build for the ballot.

“We’ll be sending out a joint UCU-NUT leaflet to all members to argue for a yes vote.

“We’re also going to launch ‘Our schools, our colleges, our communities’ – a joint campaign to defend our schools and colleges from the neoliberal policies of New Labour and to campaign for a better deal for teachers and lecturers.”

Three schools in Camden, north London – Acland Burghley, Hampstead and Maria Fidelis – had planned a one-day strike on Tuesday of next week to defend recruitment and retention payments.

Teachers had won the payments in Camden to compensate for their low starting salaries – but management wants to stop paying them to new teachers.

As Socialist Worker went to press, Acland Burghley school had won its demands to retain the payments for new and existing staff.

But the strikes were still on in the other two schools.

Andrew Baisley, branch officer of Camden NUT, told Socialist Worker, “All three ballots got overwhelming yes votes and high turnouts – it shows the strength of feeling over pay and the willingness of teachers to take action.”

How we can build fighting unions 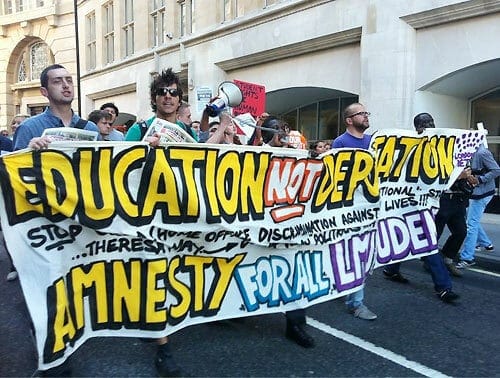