Teachers meet to discuss their campaign over pay

NEU union members in London planned a pay rally on Thursday of this week. The national executive committee of the NUT section of the union last week voted to campaign for a fully-funded 3.5 percent pay rise for all teachers.

The government’s School Teachers’ Review Body recommended a 3.5 percent rise. But the Tories want to give that to just 40 percent of teachers.

Some of the pay rise would come from the existing schools budget, meaning more cuts.

The union has said it will organise regional meetings and rallies. It could begin an indicative ballot of teachers over pay.

Teachers should call meetings in their schools to discuss and build the campaign.

A plan to create a Multi Academy Trust (MAT) in Brent, north west London, has been delayed because of allegations relating to one of the schools involved.

School bosses want The Village School to form an MAT with Woodfield School, which is already an academy.

Workers say the plan has been delayed for at least two months while the Department for Education investigates “compliance issues”.

A consultant at the school is alleged to have been paid close to £240,000 in around two years for around eight days’ work a month.

It is also claimed that, before taking up the post, he had been a trustee overseeing financial decisions made by the academy. 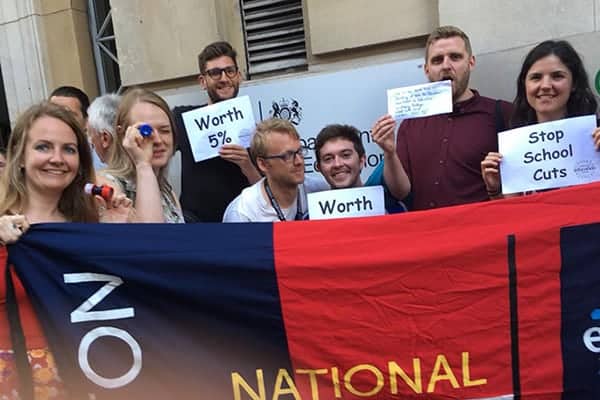