Teachers’ message to the government

Teachers’ message to the government

‘Shame on you, Labour’

THE NATIONAL Union of Teachers (NUT) conference voted for a campaign, including a one day strike, against the government’s payment by results scheme on Tuesday. The vote came after over 250 delegates walked out of the conference as education minister Estelle Morris rose to speak last Saturday. The vote and walkout show the depth of feeling in staffrooms against New Labour and its divisive pay scheme.

Delegates backed the call for action by 105,208 votes to 82,114 votes on a card vote. The result came despite the union’s leaders spending five days at the conference trying to persuade people to reject strike action. They had argued that the government was too powerful to be beaten, and they argued that union members were not prepared to strike. But delegates rejected these arguments. They know the feeling in the staffrooms over the government’s pay scheme has not gone away.

A serious campaign could now deliver a yes vote for a strike against New Labour’s education policies. But it is also true that the failure of the union’s leaders to mobilise a fight in the 18 months since the pay scheme was announced has left many teachers feeling that little can be done to stop the scheme before it is imposed in September.

Union leaders look set to try and continue that dismal course. NUT general secretary Doug McAvoy in his closing speech to conference said he would undermine any move to hold a strike. Union activists face a battle to overcome the effects of that stance. The walkout in protest at Estelle Morris, involving a quarter of the conference, shows the possibilities.

The 250 teachers who walked out held a rally outside the conference hall and discussed how teachers can resist the imposition of performance related pay. Delegates left the conference determined to spread such resistance. To build an effective campaign over the pay scheme will also mean activists connecting with wider issues where teachers feel confident.

THE CONFERENCE as a whole reflected a hardening of attitudes against the pro-business policies New Labour is pursuing. This mood was not restricted simply to education issues or issues in Britain. Two of the biggest votes at the conference were for cancelling Third World debt and for defending asylum seekers. Activists need to tap that mood if they are to build the determined campaign needed over the pay scheme. 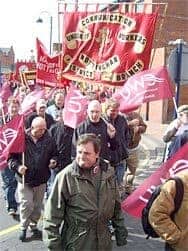