This article is over 20 years, 11 months old
There hasn't been a meeting of teachers like the one which took place in London last week for at least 15 years.
Downloading PDF. Please wait...
Saturday 10 February 2001

There hasn’t been a meeting of teachers like the one which took place in London last week for at least 15 years.

‘The worm has turned.’

‘It’s now worth staying in the job and fighting for what we believe in.’

‘We won’t paper over the cracks any more.’

They were just some of the comments as 1,200 teachers flooded out of the rally called by the largest teachers’ union, the National Union of Teachers.

They had heard NUT general secretary Doug McAvoy slam the scandalous shortage of teachers. McAvoy also promised some action over pay and workload, the issues which are at the heart of the crisis.

There was unanimous support for a ballot to refuse to cover for vacant posts. But the audience, made up of delegations from schools across London, wanted much more.

They wanted strike action and they let their union leaders know it. The union general secretary finished his speech. The applause grew more enthusiastic. Within seconds most people were on their feet cheering, clapping and chanting, ‘Strike!’

A group of six teachers from south east London triggered the explosion. They simply held up placards towards the front of the hall, spelling out the word strike.

Sheila Amrouche from Lewisham was one of them. She told Socialist Worker, ‘It was absolutely electrifying. A couple of us decided to write out the placards the night before. We wanted to send a message that we want serious action. We knew there was a lot of anger over teachers being forced to cover for a record number of vacant posts. But from one primary school you had no way of knowing what everyone across London thought. We bit the bullet and decided to hold the placards up, not sure of the reaction we would get. Then the place just went wild.’

The militancy came from all sections of the audience, and from both new and experienced teachers.

It emboldened NUT leaders to reaffirm the union’s demand for an increase from £2,300 to £4,000 in the inner London weighting payment, and similar increases for outer London and the ‘fringe area’.

Home secretary Jack Straw doubled the police’s London allowance to £6,000 last year-across the whole of the city. Teachers also called for a flat rate increase of £2,000 for every teacher across England and Wales.

There were renewed calls for strike action when NUT deputy general secretary Steve Sinott summed up the rally. He told the audience, ‘Message received.’ Someone heckled, ‘And understood?’

Stop selection in our kids’ schools

He said, ‘At the age of 22 months a child from social classes one or two (the top of the scale) is already 14 points ahead of a child from classes four or five (the bottom) on the scale of attainment. That is absolutely shocking. And the heart of the answer to what has happened to our schools over the last 20 years is child poverty. When the Tories entered government in 1979, 7 percent of children lived in poverty. That rose to 30 percent in the late 1990s. Comprehensive schools are working, not failing. The problem is that there is a national shortage of comprehensive schools. There are 27 secondary schools in Sheffield. Only about four could reasonably be called comprehensive. The rest are divided. You have, effectively, grammar schools and secondary modern schools, created by formal and informal selection. The market in education creates polarisation. It’s like football clubs. Those with the money go to the top of the table. Poorer ones get pushed to the bottom. We now have to go out confidently and argue in defence of comprehensive education.’

The government’s pay award to teachers in England and Wales is far short of what is needed to end the crisis over teacher numbers.

It is awarding 3.7 percent, which is only just above inflation.

They now need to up the pressure on the government, using the confident mood in London to spearhead a national campaign.

No cover up for shortages

THE NUT and NASUWT are balloting for no-cover action in London, Doncaster, Nottingham, Leicester and Hertfordshire.

The problem of teacher shortages is across England and Wales. Every union member should be requesting a ballot for action now. There will also have to be enormous pressure to win strike action from the union leaders.

That means taking initiatives at school level that can bring the spirit shown in the London meeting into every staff room and locality.

Rachel Green, a student who is training to be a teacher in Manchester, told Socialist Worker, ‘I want to be a teacher because I believe in comprehensive education. New teachers do not accept the government’s performance related pay. ‘People like me, however, are attracted by teachers taking action for themselves and the students.’

Hattersley claimed the government is now moving back towards traditional Labour Party policy on education.

But speakers from Sheffield, Leeds, Manchester and Doncaster outlined how government schemes are undermining comprehensive schooling. They pointed to:

PFI and the sell-off of local education authority services in Leeds.

The creation of City Academies-privately run schools that can select 10 percent of pupils-in Sheffield, Manchester and elsewhere.

The culture of management bullying, typified by Sheffield Hallam University where two managers brought in from the rail and mining industries are trying to break the unions.

Mary Reape, a teacher from Doncaster, said, ‘We are balloting for no-cover action because of the teacher shortage. We don’t need gimmicks from the government. We need money into the schools with no strings attached. I am encouraged by this meeting. It is part of a spirit of resistance. We don’t have to simply complain any more. We can act.’

I’ve been teaching for four years. Private sector rents have gone through the roof. But it is not just pay. The government has abused us. This rally is fantastic. All of us will be standing up for ourselves and I want to help build a yes vote for action. It will make a difference in school tomorrow, even before the ballot. I feel we can go in and just sort it out.’
Natasha, North London

Firefighters rally in defiance of bullying and cuts 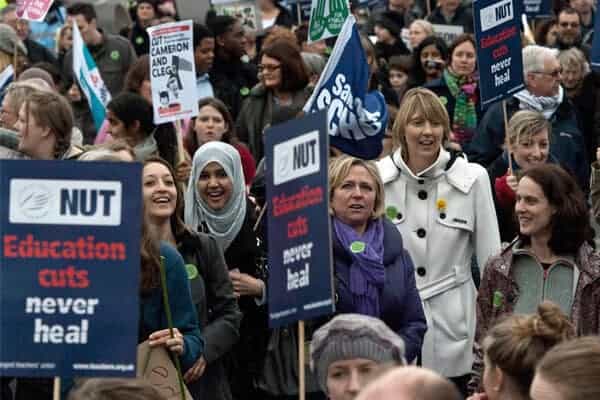 Teachers vote to walk out against Tory cuts 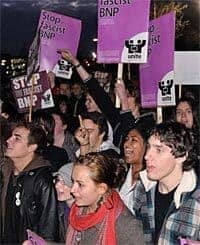