This article is over 14 years, 6 months old
Teachers are also gearing up to join the wave of opposition to the public sector pay freeze.
Downloading PDF. Please wait...
Tuesday 26 June 2007

Teachers are also gearing up to join the wave of opposition to the public sector pay freeze.

The second year of their pay deal is delivering them an effective pay cut.

Kevin Courtney from the executive of the teachers’ NUT union spoke to Socialist Worker about how the union is preparing for battle.

He said, “The national executive last week voted unanimously that we will ballot our members over strike action next term if the government doesn’t change its mind over pay.

“We want to persuade other teachers’ unions to ballot alongside the NUT, and we are actively in talks with these unions.

“But the NUT is committed to balloting its members next term, even if others do not ballot with us.

“We are also submitting a motion to the TUC over joint campaigning across the public service unions over pay.

“Teachers should register their willingness to fight in a survey launched on the NUT website on Thursday of last week.

“By Tuesday almost 1,000 people had said that they were willing to take industrial action.”

As Socialist Worker went to press the NUT was meeting its branch secretaries to plan the next stages of the campaign.

To take part in the survey go to » surveys.teachers.org.uk/node/2

Now US kills children in Pakistan 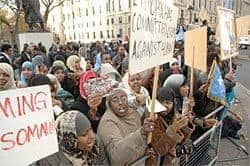 Somalia demo: ‘We want our country back’