Teachers walk out across the north west of England

Teachers across the of are on strike to defend their pay, pensions and conditions.

The walkout hit more than 2,700 schools today, Thursday. It’s the first in a series of planned strikes by the NUT and NASUWT unions.

Sue Bannister is an NUT member in . She told Socialist Worker, “We are under sustained attack. What have we done to deserve it?

“My son’s going into teaching. His course will cost £27,000 not to mention loans he’ll need to live on.

“And all for something Gove says we don’t care about.”

Strikers report widespread support from parents and other workers on their picket lines.

Mark Bell also teaches in . “When children talk about what their parents think there’s a lot of anti-Gove feeling,” he told Socialist Worker.

“Parents value teachers. People are really behind the strike in my school. There’s a real determination to stand up.”

Messages of support have flooded in. In and elsewhere groups of teachers are wearing green T-shirts to show their support.

And the PCS union has organised lunchtime protests today in solidarity with the strike.

“It’s not enough to keep your head down and get on with it,” he said. “I’ve not had a pay rise for three years and the cost of living keeps going up. Something’s got to change.”

Teachers are rallying in Liverpool, , Preston and . The scale of the support for the action smashes the myth that strikes are unpopular.

In reality millions of ordinary people are suffering under the Tories and want to see them stopped. We need more action like today’s teachers’ strike so that we can beat them.

As Sue put it, “We should be going in the direction of a general strike. Look at and . We need to fight like they are.” 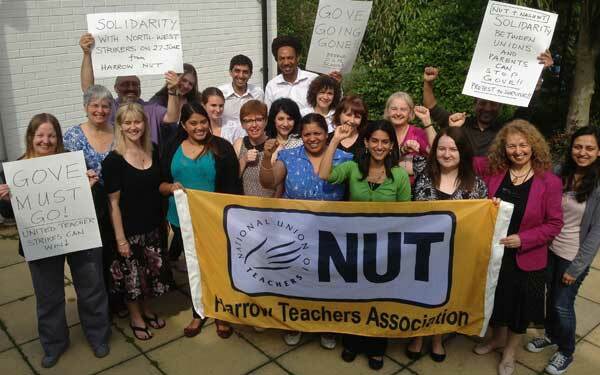