This article is over 17 years, 3 months old
THE GENERAL secretary of the NUT teachers’ union, Steve Sinnott, was this week sending posters for the European Social Forum (ESF) into every school in England and Wales.
By Nick Grant
Downloading PDF. Please wait...
Saturday 09 October 2004

THE GENERAL secretary of the NUT teachers’ union, Steve Sinnott, was this week sending posters for the European Social Forum (ESF) into every school in England and Wales.

He is asking union branch secretaries to push the ESF with members.

There will be an NUT stall at Alexandra Palace.

The union’s participation is exactly the kind of outward-looking approach activists have been pushing for.

Two weeks ago 80 representatives of left-led NUT branches met in Birmingham to debate the other issues that we need united action on.

These include the assault on pensions, workload, and the Blairite vision of the “Five-Year Plan” for education.

There was agreement to set up an elected editorial body for a revised Campaign Teacher.

This is the activists’ paper that is circulated via NUT branches.

We will also be campaigning for Christine Blower in the election for NUT deputy general secretary.

Since then, dreadful new recommendations on teachers’ pay have been published.

Basically, every school will have to undergo a complete re-structuring with effect from January 2006.

Thousands of teachers will lose out when current allowances end. So this becomes another key area to agitate around.

Gordon Brown’s sidelining by Blair last week means that the hopes of those hoping to reclaim Labour are dashed.

This leaves much less wriggle room for union leaders like Sinnott to ignore rank and file demands for action on all these issues.

Sinnott is calling for a parliamentary lobby on pensions simultaneously with the PCS union’s 5 November strike action.

Every step we take to get school workers to the ESF increases our ability to demand NUT leaders ballot for strike action, not just a lobby, alongside the PCS. 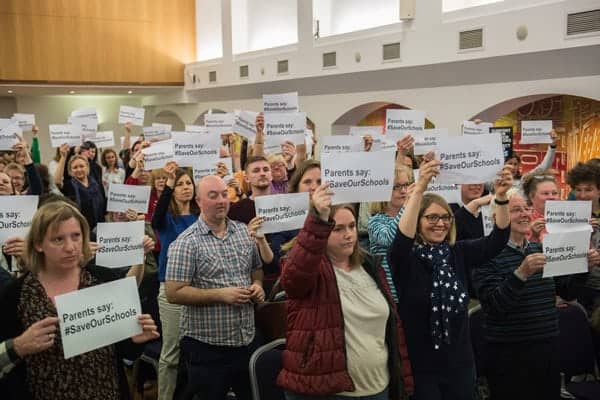 Gathering for a better future