War criminal George Bush is coming to Britain as part of his “farewell tour” of Europe. And he brings with him plans for a new war on Iran and demands for more sacrifice in Afghanistan and Iraq.

He will land in Britain this Sunday 15 June and his final stop will be Belfast.

Since he stole the US elections in 2000, Bush has brought untold disaster on the world. He has launched wars without end, run a worldwide regime of kidnapping and torture, and brought death and ruin to every corner of the world.

But now his plans are in serious trouble. Resistance to his “war on terror” by the global anti-war movement has scuppered his efforts to extend the reach of US imperialism.

His armies are bogged down in bloody stalemates in Iraq and Afghanistan. His attempts to crush the Lebanese and Palestinian resistance have ended in humiliation.

While Bush poured hundreds of thousands of troops into his “war on terror”, his economic policies have driven millions of ordinary Americans into poverty and despair.

He may be one of the most unpopular presidents in US history, but Bush is no joke. He is a dangerous and desperate man looking to launch yet more wars.

He wants to use the so called “security accords” he is trying to impose on Iraq as a trigger for another conflict.

The deeper Bush sinks into the quagmire in Afghanistan, the more pressure he exerts for an invasion of northern Pakistan – with the promise of yet more bloody and endless fighting.

Instead of being welcomed by Gordon Brown and whisked off for tea with the queen, Bush should be hauled off in chains the moment he sets foot on our soil. 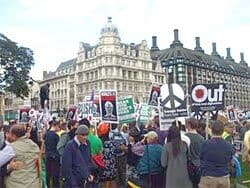