Working class people filled the streets of London last Saturday in a mass show of opposition to Tory austerity.

The theme of the marches was that workers need a pay rise. But while marchers were furious about pay, the anger went much, much deeper.

“They’re cutting all the disability benefits. They don’t give us a pay rise yet we have to do more work.”

Lulu also works at Heathrow. “We’ve had no pay rise for the last three years,” she said. “House bills are going up and my rent’s just gone up. And now they’re cutting our holidays.”

Julia Littlemore is a member of the Unison union’s Cardiff and Vale health branch.

She told Socialist Worker, “We’ve got a lot to fight for. It’s pretty grim in the NHS. We don’t have time for breakfast or lunch breaks. We end up working longer for no extra pay.”

The protests were an incredible show of union strength. Big unions such as Unite, Unison, the GMB and the PCS joined smaller unions such as Equity and Usdaw. 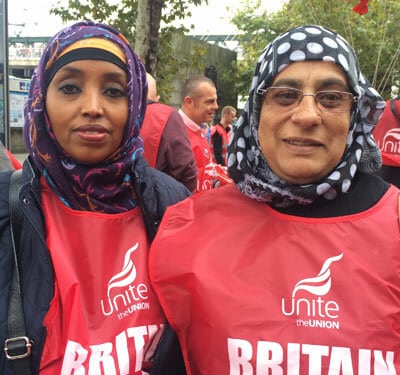 John Mattewman has been taking part in Freedom Rides in Barnsley to demand councils reinstate free train travel for pensioners.

He was buoyed by the size of the London demo. “To be part of today’s march with so many others has been fantastic,” he told Socialist Worker.

“I wouldn’t have missed it for the world.”

Everyone had lots of reasons for marching. Unison member Jeanette is a midwife in the north west of England. She told Socialist Worker, “I’ve been a midwife for 30 years and year on year it is getting harder. The conditions are putting safety at risk.”

Natalie is a Royal College of Midwives rep in Liverpool. “I struck for the first time last week,” she said.

“I’ve been a midwife for five years and it’s the worst now than it’s ever been.

“I love the job, but it takes it out of you. There aren’t enough staff. And if you feel devalued it makes it harder to carry on. Midwives are furious—we can only take so much.”

Union leaders’ speeches were full of fighting talk at the rally in London.

Unison leader Dave Prentis promised that the union would call more action in the health service next month.

Unite leader Len McCluskey told the crowd, “We need more than anger. We need to mobilise and we need to organise.”

He demanded more of the Labour Party too, saying it should offer “a clear, socialist alternative”.

“I say this to Labour—stop being scared of your own shadow,” he said. “Be brave, believe that people power and working class movements can change our country for the better.” 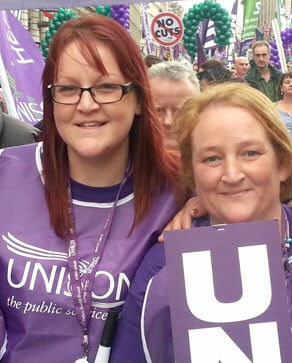 Yet many workers were angry at union leaders’ lack of action.

They had called off a planned strike of local government workers earlier in the week for a new “offer” that gives them no more money.

Dave Prentis was heckled with shouts of “strike” when he described the offer as “not good”.

Chris is a Unison member in Tower Hamlets, east London.

He told Socialist Worker, “I don’t think the new offer is worth much. The union definitely should not have called off our strike. We need to get the action back on.”

Ann Marie is council worker in Portsmouth and Unite union member. She told Socialist Worker, “I heard Len McCluskey tell the rally that we have to keep up the fight over pay.

“But I’m confused. We were supposed to be on strike but had the rug pulled at the last minute.

“There’s a danger this shakes people’s faith in industrial action and the union.”

There was anger from some that for all the warm words union leaders were calling off action.

Ruffina McIntyre, Unison Hillingdon, said, “I’m marching to support workers that need a pay rise. I didn’t think it was right to call off the strike—we were unified for the first time and then it was pulled.”

Karen Reissmann is a nurse on the Unison union national executive (pc). She said, “The level of fear of the future and anger at the injustice over pay—and everything else—is rising.

Attitudes have really shifted across Scotland

Naomi Junnor, who is in Glasgow City Unison, spoke to Socialist Worker in a personal capacity.

She said, “Getting people to attend union meetings is hard work.

“People are quite disaffected, especially when the union takes decisions away from you.

“We were all expecting to strike last Tuesday but we were told at short notice that a ballot has replaced the strike. 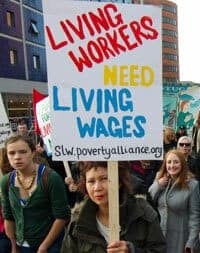 Part of the march in Glasgow (Pic: Socialist Worker)

“This is to consult members about a revised pay offer from the employer. But that offer doesn’t apply to my branch at all.

“It has no relevance and it’s not going to benefit us.

“I think we should be out on strike next week.”

Rose Traynor, who is also in Unison, said, “There’s been a real shift in people’s attitude to the Labour Party.

“It supported the No campaign, but lacks support for everyday workers in the public sector.

“There’s been a lot of disappointment and that will be reflected in the future very clearly—particularly from younger people.

“They are quite disillusioned.”

The money we need is there

Protesters were not buying the lie that there’s no money to pay workers good wages, or to properly fund services.

Jane is an NASUWT member in Medway. She said, “Nobody’s getting a pay rise who deserves one,” she said. “But the bosses are getting them and corporations are still avoiding tax.” 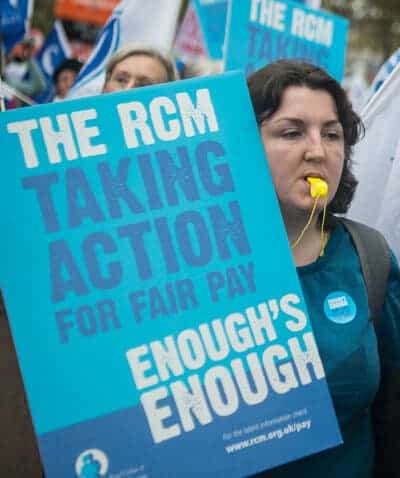 Royal Society of Midwives member on the demonstration in London (Pic: Guy Smallman)

Gail Maunder is a health care assistant and Unison member at the Royal Devon and Exeter Hospital.

“Why should MPs get a pay rise and not us?” she asked.

Everyone agreed that the Tories had to go, and that workers needed a better deal.

But there were big differences of opinion in how to do that.

Many marchers stressed the need to get Labour elected. But they said Labour should be doing a lot more to support ordinary people.

As student nurse Samantha put it, “Politicians are running this country into the ground. Just look at the number of people homeless, unemployed or using food banks.

“I could run this country better than they could.”

The demonstrations mobilised protesters from beyond the trade union movement.

Aurelia Smith, a retired PCS member from Durham, said, “Austerity isn’t working. I retired at 60 but I don’t get my pension until I’m 63. I’m not on any figures, but really I’m unemployed.

“I think strikes are the answer really.”

Diane, a member of CND, said, “The billions of pounds they want to spend on renewing Trident could be spent on jobs and wages.

“Protests like this help make people think about the issues. A lot of people don’t realise how much Britain’s nuclear weapons cost.” 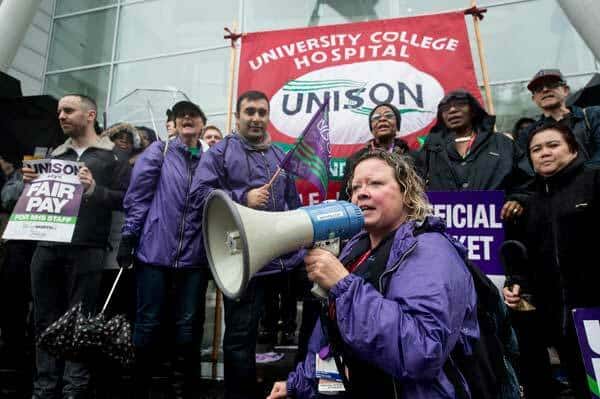 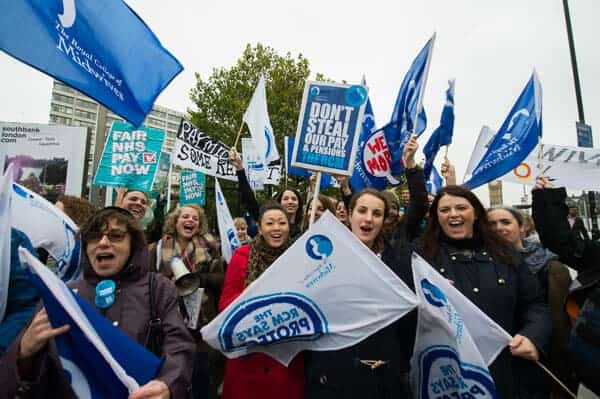