This article is over 16 years, 8 months old
Council workers in Sefton, Merseyside, were set for a 48-hour strike this week over the victimisation of activists in their Unison union branch.
Downloading PDF. Please wait...
Saturday 03 September 2005

Council workers in Sefton, Merseyside, were set for a 48-hour strike this week over the victimisation of activists in their Unison union branch.

Mass meetings held on Tuesday of last week voted for strike action on Wednesday and Thursday of this week because of the council’s refusal to lift the suspensions of Nigel Flanagan and Paul Summers.

Both were suspended in May after they attended a demonstration against Sefton’s plans to privatise its council housing stock — plans which were scuppered last month when tenants voted to reject them.

The council is accusing Nigel Flanagan and Paul Summers of serious misconduct and intimidating council staff.

But CCTV footage shows no evidence of this, and eye witness statements sent to the council also back up the suspended pair’s account.

Even police logs of the demonstration report that the protest was “peaceful” and passed “without incident”.

Nevertheless, the council refuses to lift the suspensions and is pressing ahead with charges that could lead to the two activists being dismissed.

A statement by Sefton Unison following the Tuesday meetings says the branch “remains convinced that this represents victimisation of its members” and that it is a “clear political attack” on the union.

Unison leader Dave Prentis has sent a letter to the council demanding justice for the accused union reps.

It is very important that the union at every level gives support to the fight in Sefton.

Meanwhile, the branch has opened its new offices in response to the council locking them out of their previous offices last month.

The statement calls this action “reprehensible” and notes it was personally overseen by Sefton council’s chief executive Graham Haywood. 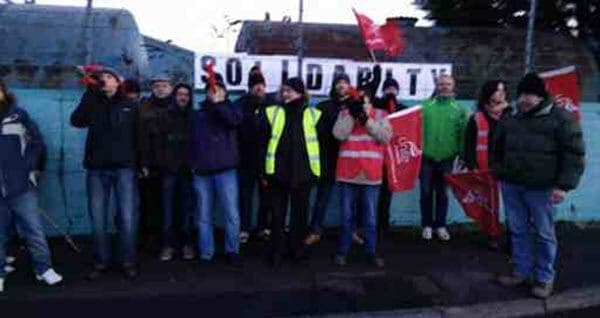 Shower of solidarity for recycling strike in Bath