This article is over 10 years, 4 months old
Travellers who live at Dale Farm in Essex celebrated as they won a last-minute court injunction delaying their eviction this week.
By Sadie Robinson, at Dale Farm in Essex
Downloading PDF. Please wait...
Tuesday 20 September 2011

Travellers who live at Dale Farm in Essex celebrated as they won a last-minute court injunction delaying their eviction this week.

A court ruled this Monday that Basildon council’s bailiffs cannot legally evict anyone until another court hearing, due this Friday.

But the battle to save the site is far from over. The 400 Travellers could still face eviction, depending on what the court decides.

Still, delighted Travellers danced through the streets and cheered as they heard the news.

They had expected to suffer forcible eviction and had been waiting for bailiffs to arrive all day. Now suddenly everything had changed.

Kathleen told Socialist Worker, “In the past we’ve just had to move on. An eviction is an eviction. We’ve never got this far before.”

Mary added, “I got up this morning and my chest was tight. I was so worried. Now I can breathe again. It’s the loveliest feeling we’ve ever had.”

The news gave a boost to everyone who has been ­fighting to save the site.

Jacob is one of the campaigners who has been staying at Dale Farm to support Travellers. After the injunction he said, “This is great news—but this isn’t over yet. We have lots of people here and so have a great chance to stop an eviction.

“If people stay here, when the weekend comes we’ll really be ready for them.”

Justice Edwards-Stuart granted the order because of concerns that measures ­carried out by the council “may go further” than the terms of the enforcement notices.

There is confusion around what the council is ­entitled to do to each individual pitch at the site, and whether Travellers have been sufficiently informed.

The mainstream media has been full of lies about the situation at Dale Farm. Often, journalists have taken their lead from Basildon council’s Tory leader Tony Ball.

So many reporters claimed on Monday that most Travellers had left the site—and that only “activists” remained.

That was never true. Most of the Travellers, including many children and sick people, are still there.

“Tony Ball is a lying bastard,” said Breda, who’s lived at Dale Farm for ten years. “He said this land was greenbelt. It was a scrapyard when we bought it.

“We’ve tried to make a future for our children. They go to school and they can write their names. It might not sound much to settled people but for us it’s a big deal. We can’t do that.

The media has also tried to play up divisions between Travellers and activists. Some newspapers said that ­protesters sabotaged an attempt by the council to talk to Travellers.

Again, it was a lie.

Grattan Puxon is the secretary of the Dale Farm Housing Association. He told Socialist Worker, “Any sign of negotiations fizzled out when the council said the only way forward was for Travellers to leave.

“There are strong bonds between residents and the protesters. Residents are becoming more militant. This has become an iconic event with international importance.

Travellers don’t want a violent eviction. Many have posted signs on their homes in a desperate attempt to stop bailiffs smashing them up. “Owner in hospital, will move in 2-3 days,” reads one. “Lady with difficulty breathing,” reads another.

One asks simply, “Where will we go?”

Poster pictures of some of the 100 children who live at the site adorn the paths. Most were born in Basildon and have lived at Dale Farm all of their lives.

But the council has failed to offer alternative housing to many of the Travellers—meaning they would be made homeless.

An eviction at Dale Farm, the biggest Traveller site in the country, would set a deadly precedent.

It would give a green light to councils everywhere to clamp down on Travellers.

That’s why it’s so important to stop an eviction.

Help save Dale Farm – what you can do 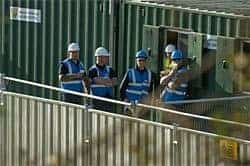