The BBC and Anna Teeman

This article is over 16 years, 1 months old
The National Union of Journalists (NUJ) is planning to ballot its members at the BBC over the victimisation of union rep Anna Teeman.
Downloading PDF. Please wait...
Saturday 10 December 2005

The National Union of Journalists (NUJ) is planning to ballot its members at the BBC over the victimisation of union rep Anna Teeman.

Anna is an assistant producer who represents NUJ members in the factual and learning department in White City, west London.

The BBC has sent her five letters telling her she would be dismissed on 2 December. None of these letters has stated any reason for this dismissal.

A meeting of NUJ workplace reps in London last week called for a campaign of industrial action in her support.

Anna was very active in reviving the NUJ chapel and successfully organised strike action at White City against jobs cuts across the BBC in May.

Becky Branford, an NUJ member in News Interactive, told Socialist Worker, “Anna was supposed to leave on 2 December but that has been postponed for a few weeks.

“This shows that management are obviously concerned about the response they’ve had to the dismissal.”

Tim Malone, a Betcu union rep, told Socialist Worker, “A Bectu meeting has passed a resolution saying that members believe management is singling out Anna Teeman because of her trade union activities.” 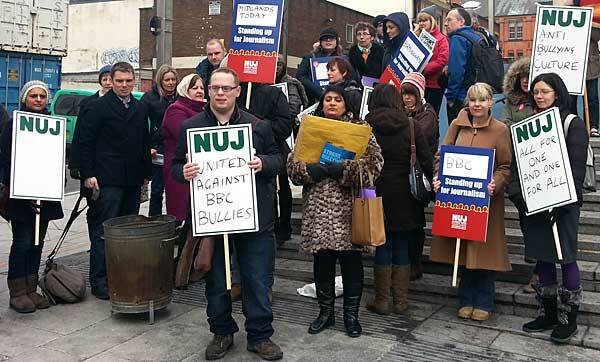 BBC workers walk out to take on the bosses’ cuts

Significant victory down to solidarity