The bloody price of racist hatred

This article is over 19 years, 4 months old
PEIMAN BAHMANI, a 29 year old Iranian refugee, was stabbed to death on Wednesday of last week. It happened on the street where he lived in Sunderland. Peiman Bahmani arrived in Britain around two years ago after fleeing from persecution in Iran. Under New Labour's refugee dispersal scheme he was forced to live in the run-down area of Hendon in Sunderland.
Downloading PDF. Please wait...
Saturday 07 September 2002

PEIMAN BAHMANI, a 29 year old Iranian refugee, was stabbed to death on Wednesday of last week. It happened on the street where he lived in Sunderland. Peiman Bahmani arrived in Britain around two years ago after fleeing from persecution in Iran. Under New Labour’s refugee dispersal scheme he was forced to live in the run-down area of Hendon in Sunderland.

He wanted to build a new life in Britain. He had been given a work permit and was set to move to Brighton to start up a business the day after the attack. But as an asylum seeker Peiman Bahmani was an object of hate for many politicians and the right wing press. They have fed a climate of hysteria over refugees. This has fuelled a rise in racism.

The hysteria has given confidence to the Nazis in the British National Party (BNP). The BNP stood in six wards in Sunderland in the elections in May. In two of these they got votes of 28 percent and 19.7 percent. These wards encircle Thornholme ward in which Peiman Bahmani lived. Racial harassment in the area has increased. Peiman Bahmani had complained of racist abuse in the run-up to his murder.

The house where Peiman lived had its windows broken just a week ago. Police have had nine separate records of racial attacks at his house. Racists taunted mourners who attended a 200-strong vigil for Peiman Bahmani on Friday of last week. One said, ‘We got one and we’re going to get another.’

Ray Smith, who was taking pictures for Socialist Worker, reported, ‘I heard a commotion towards the rear of the procession. An asylum seeker came running towards me. He had a look in his eyes that you see in foxes that are being hunted. He had a red mark on his cheek just below his eye. It was clearly visible. He told me a man had run into the crowd, punched him, and then pulled out a knife and said he was going to kill him.’

Verron Twnda, a refugee from Congo who was on the march, said, ‘The police and the government must help asylum seekers and protect us. The Home Office sent us here to Sunderland – we did not ask to come. We are not allowed to leave.’

Gabriel Kibale, also from Congo, added, ‘Many bad things happen to refugees in Sunderland and no one does anything. I used to think that England was a safe country but I am not so sure now. Many people are very afraid.’

Many local people expressed their shock at Peiman Bahmani’s murder to campaigners on an Anti Nazi League stall in Sunderland last Saturday. Up to 350 signatures were collected on a petition condemning the attack, and £40 was given in donations.

Their response is in contrast to that of the BBC. It continues to give the BNP favourable publicity. The Radio 4 Today programme interviewed the head of the BNP youth group for five minutes on Tuesday. But it gave no coverage to the Anti Nazi League carnival last weekend (see pages here).

Amir Saeed, who lives locally, said, ‘We have to build bridges with local residents, and for black and white to unite against a tiny but dangerous minority of racists. If we can do this then something good will have come out of this tragedy.’

THE POLICE have charged three people in connection with the death. One is being charged with murder, racially aggravated assault and violent disorder.

‘CAN you imagine how his elderly mother and father feel to see their son’s dead body coming home to a place he left because he was in fear of his life?’
TAHRI KHAN, community activist in Sunderland. Peiman Bahmani’s body is returning to Iran for his funeral 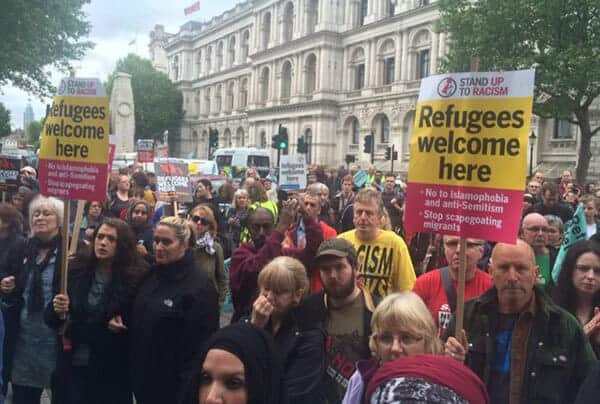