The bullying bosses of Burslem

This article is over 14 years, 7 months old
Socialist Worker spoke to Ben and Edgar, two Burslem strikers in the CWU postal workers’ union who between them have over 30 years’ experience in Royal Mail.
Downloading PDF. Please wait...
Tuesday 15 January 2008

Socialist Worker spoke to Ben and Edgar, two Burslem strikers in the CWU postal workers’ union who between them have over 30 years’ experience in Royal Mail.

Edgar is one of 12 Burslem workers who have either been sacked or suspended.

“We’ve always fought for the best deal for our members,” says Ben. “Our office has always been 100 percent solid during national strike action.”

“I’d say we are one of the strongest offices in the region,” adds Edgar. “And that’s exactly why management went for us.”

Ben and Edgar explained how their current dispute evolved after a new delivery office manager was installed in March last year. It soon became clear he had been sent with a mission to break the union.

“He’d only been in a few days before he closed our TV rest room and converted it into his personal office,” says Edgar. “He decided he wouldn’t consult with anyone in the office about this.

“That was just the opening shot. After that he tore up all our overtime agreements, slashing payments in half. Unsurprisingly, no one wanted to do any after that.”

“That’s when management started putting pressure on the union to get people to sign up to do overtime,” says Ben. “When people carried on refusing, they started harassing the reps.”

In September management suspended 12 workers, including all three union reps, pending investigation. Bosses alleged that the union was intimidating workers out of doing extra shifts.

Despite the fact that all the union reps had been removed from the premises, the entire membership walked out on unofficial strike. They only returned the next day after the CWU declared it would seek to make the strike official.

“Like 60 others, I was interviewed about the alleged bullying,” says Ben. “I told them that there was bullying in the office – and it was coming from management. I demanded to know what they were going to do about it.

“But once it was clear that I was not going to attack the union, the investigator just didn’t want to know.”

The interview transcripts were only made available after the CWU demanded to see them as part of its appeal. They reveal that 95 percent of those interviewed said that the union never bullied them, but 79 percent said management had bullied them.

The Burslem strikers are demanding an independent appeal, conducted by an outside organisation, for all who have been disciplined.

They fear that if Royal Mail gets away with this attempt to break the union at Burslem, the company will seek to use the same tactics elsewhere.

It is up to the entire union movement, and particularly the CWU leadership, to ensure that this does not happen.

The strikers’ names have been changed to protect them from management reprisals. 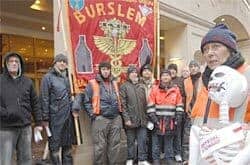