This article is over 11 years, 9 months old
It's not true that we have to slash services and jobs—We can fight back—and make the rich pay
Downloading PDF. Please wait...
Tuesday 06 April 2010

A great lie will dominate the general election campaign—the lie that there is no alternative to devastating cuts in vital public services.

For four weeks, politicians will tear each other apart over the precise details of this programme.

They will debate whether the full range of cuts should start after 50 days, a year, or somewhere in between.

They may fall out over precisely which small parts of the NHS and education should be protected from the storm.

They will divide over exactly where the worthy “frontline services” end and where the wasteful “backroom” staff, who can supposedly be readily despatched, begin.

But nobody will stand up and say that the whole debate is a fraud.

There is no need for any cuts or a single job loss.

In the 1950s the level of public sector debt compared to gross domestic product was about twice what it is today. Nobody spoke about emergency programmes of cuts.

As we show on our centre pages, it is easy to raise over £300 billion by taxing the rich a little more and by repelling the generals’ demands for yet more military hardware.

None of that impresses the bankers and others who lend money to governments.

They want to see cuts, and so the government is jumping to their instructions. It’s already happened in Greece, where huge cuts are going through, policed by the European Union and the International Monetary Fund. The same level of disaster is threatened here.

But nobody asks the simple question of why working people should have their jobs destroyed and their services wrecked in order to pay the bills for the capitalist crisis and the bankers’ bailout.

The government, backed by all the main parties, handed £1.4 trillion to the bankers to maintain profits and to rescue the financial system.

That money saved the bankers, the chief executives and the boards of directors.

But we’re told we must pay—through closed hospitals, fewer college courses, hundreds of thousands of job losses, slashed living standards, and a future of unemployment or dead-end jobs for many young people.

When the economic crisis broke in 2008 there was much talk from bankers and company directors of a new era of sobriety and humility.

But the rich are so arrogant that they have already plunged back into a world of bonuses and opulence.

Last week John Hargreaves, the founder of clothing stores chain Matalan, announced he will pay himself a £250 million “special dividend”.

The company borrowed £525 million, and almost half of that gross sum is going towards a “distribution to shareholders”.

Hargreaves and his family are the only shareholders.

This is just one of hundreds of examples from the last few months of the rich stuffing their pockets, and one of many more to come.

The lie about cuts is the election’s great lie. But it is not the only one.

It is a lie, peddled by all the main parties, that British troops must stay in Afghanistan.

The only result will be thousands more ordinary Afghans butchered and hundreds more British soldiers killed or injured.

It is a lie that immigration is the reason for poverty and job losses—it is the rich and the profit system that is the real cause.

And it is a lie that ordinary people can do nothing except vote to choose between the competing cuts packages from the political elite. Resistance can blunt and then throw back the offensive.

If workers support each other’s particular struggles, if communities organise and campaign against the cuts, and especially if the two combine in mighty unity then the cuts will be defeated.

Whoever wins in May we will have to fight. Keep these four pages and remember: there is no need for a single cut. 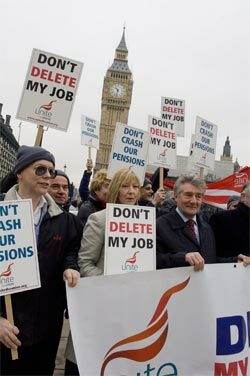