The main dangers that face children

THE MAIN DANGERS THAT FACE CHILDREN

TO JUDGE by much of the media you would think that paedophiles are the main danger to children. They are not.

Each year about 80 children are murdered-73 of them will be killed by their parents or close relatives. On average only seven children will die at the hands of strangers, and not all of these will be motivated by twisted sexuality. This pattern is true of all forms of sexual abuse.

The children’s charity Barnardo’s says, “Most recent public debate has centred on the danger posed to children by ‘paedophiles’. In fact the stereotype of the ‘dirty old man’ is far from the truth. Of calls to Childline in a year, 57 percent of abusers were identified as family members, fathers, uncles, grandfathers and stepfathers, while 33 percent were otherwise known to the victim -friends, neighbours or authority figures such as teachers. Strangers accounted for just eight out of 1,003 cases. The focus on ‘paedophiles’ reinforces images of abusers as monsters who are totally different to other men, drawing attention away from the far more prevalent issue of abuse within the family.”

Compare the seven children murdered by strangers to traffic deaths.

Last year 103 child pedestrians were killed on the roads. More than 6,000 others were injured, over 1,000 of them seriously. One obvious way to reduce this death toll is to slash the speed limits. Seventeen out of 20 children hit by a car travelling at 40mph will be killed. At 30mph nearly half die. At 20 mph one in 20 dies.

So if the urban residential speed limit was reduced everywhere to 20mph, between 40 and 90 children’s lives would be saved each year. When Havant Borough Council, which borders Portsmouth, introduced a 20mph limit on some of its roads, the traffic accident casualties fell by 40 percent. The government’s own trials have suggested that 20mph limits could cut child pedestrian casualties by up to 70 percent.

But the government backed off from a 20 mph limit in its recent proposals for cutting road deaths. Many of the papers which have whipped up panic over paedophiles applauded the government’s climbdown. The government refuses to act over other threats faced by children and young people.

It does not keep statistics on the number of homeless young people. But it is estimated that between 100,000 and 200,000 under 18 year olds experience homelessness each year. Housing Benefit does not cover the costs of deposits on rented accommodation and, in October 1996, Housing Benefit for people under 25 was restricted even further to the cost of a single room in shared accommodation.

Over 40,000 children run away from home each year because of violence, abuse or unbearable family tensions. Yet government policy is based on the view that children should stay with their families. Since 1988 16 and 17 year olds have not been entitled to Income Support. When they flee their homes they often end up on the streets or are vulnerable to drug dealers or to being drawn into prostitution. 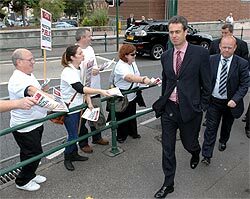 Growing anger at New Labour as post fight heats up