The men who run Britain

The men who run Britain

IN THE middle of last week’s fuel blockades Tony Blair met the oil company bosses in a desperate effort to get them to resolve the crisis. He virtually admitted to them that it was up to the oil giants, not the government, to decide it was time for the protests to stop.

As the Guardian wrote, “Blair’s talks around the cabinet table were with nine of the men who really run Britain.” Any sort of left wing government could have torn into the oil companies for their profits and their environmental destruction.

It could have encouraged people to direct their protests at the oil bosses. But New Labour has followed a systematic strategy of installing fat cats in Whitehall.

Blair has made them ministers, advisers, heads of agencies and chairmen of key committees. This is just one aspect of a wider process. Bosses will always use their tremendous economic power in an effort to shape governments and, in extreme circumstances, even destroy them.

But New Labour has gone further. It has gleefully welcomed the fattest of fat cats to direct policy. As leading environmentalist and writer George Monbiot says in his new book, “Corporations are overthrowing us. They are seizing powers previously invested in government and using them to distort public life to suit their own ends.”

Blair has been particularly keen to put oil company executives at the centre of his government. They make sure their own profits are kept safe, environmental laws are blunted and energy policy is tailored to meet the needs of the fat cats.

He was responsible for negotiating with European ministers over a common energy tax and the removal of controls on the energy market.

Blair made him chairman of the government’s Advisory Committee on Business and the Environment. He then persuaded the other leaders of the G8 industrialised countries to accept Fay as head of the G8 global taskforce on renewable energy.

BP-Amoco is the result of one of the biggest mergers in history. BP and Shell have also donated a string of lesser-known figures to work for free in the Department of Trade and Industry and the Foreign Office.

Even this week it was revealed that Blair has appointed oil executives and Sir John Evans, head of the Association of Chief Police Officers, to the taskforce to deal with the fuel crisis.

JOHN PRESCOTT received a quick lesson on business involvement in government when he became head of the Department of the Environment, Transport and the Regions.

George Monbiot writes, “It is clear that John Prescott did not, at first, understand what was expected of him. He knew he was the development industry’s regulator, but he did not seem to appreciate that he was also supposed to be its promoter. After he criticised Britain’s failure to win a contract for the Millennium Dome cladding the response was swift and furious. Graham Watts, chief executive of the Construction Industry Council, growled, ‘I can’t understand what his problem is. It is supposed to be his job to act as advocate for the construction industry. He needs to sit down and think about his role.’ Another construction chief said, ‘We have a lot of work to do to educate Old Labour people like Prescott.’ Mr Prescott got the message. Seven weeks after he bemoaned the loss of the Dome contract he had clearly come to understand his curious duties perfectly. ‘I want to be a champion of your industry,’ he told a construction industry conference. ‘I want to work actively in partnership with the industry.’ The visits, the special briefings, the official attendance at construction industry events started all over again. His deputy, Nick Raynsford, told Building magazine, ‘I see my job as a combination of creating a climate in which industry can do well-like unblocking the Private Finance Initiative-and helping the industry itself rise to the challenge.”

Prescott and Raynsford were soon in the incredible position of heading lobby groups trying to change the regulations put forward by their own departments.

The fat cats directing our lives

AMONG THE dozens of fat cats given key appointments by Labour are:

Chair and chief executive of Reed International, where he sent 900 employees from work to welfare. He was appointed as chairman of the New Deal Task Force responsible for finding ways of getting people to move from welfare to work.

Director of Commercial Union, named and shamed by the Treasury for 7,900 possibly mis-sold pensions. He was appointed to the board of the Occupational Pensions Regulatory Authority, which protects pensioners from being exploited.

Director of SmithKline Beecham plc, polluter of streams in Sussex and Gloucestershire. Previously employed by BP, part owner of AgrEvo, named and shamed by government body for failing environmental regulations. He was appointed head of the Environment Agency’s Environmental Protection Directorate.

Non-executive director of Anglian Water, which was prosecuted six times for pollution incidents. She was appointed director general of environmental protection at the Department of the Environment.

Chairman and managing director of Ford. He was appointed chairman of the government’s Cleaner Vehicles Task Force.

Head of the special projects division at the construction company Tarmac, one of the major builders of PFI hospitals. He was appointed chief executive of the Department of Health’s Private Finance Unit. He then returned to Tarmac to run its Private Finance Initiative division.

LORD Sainsbury Chairman of supermarket chain J Sainsbury plc-was made a minister in the Department of Trade and Industry, which regulates competition policy. He is chairman of the Food Chain Group, which represents food retailers on the government’s Foresight Programme.

Sainsbury is principal backer of the biotech company Diatech. As science minister he led a delegation of biotech companies to the US, partly funded by the Department for Trade and Industry.

LORD Marshall He used to be chairman of British Airways where he campaigned against plans to introduce an aviation fuel tax. New Labour put him in charge of chancellor Gordon Brown’s energy tax review, which investigated the case for new fuel taxes on corporations.

Monbiot’s book a must

MOST OF the information on this page is taken from George Monbiot’s excellent new book, Captive State: The Corporate Takeover of Britain (Macmillan 12.99). It shows how business has penetrated every part of society which is supposed to be under “democratic” control.

George Monbiot is also taking part in this weekend’s counter-conference in Brighton, where he will speak on “Globalisation and resistance” and lead off a workshop on “Can we stop the market destroying the environment?” 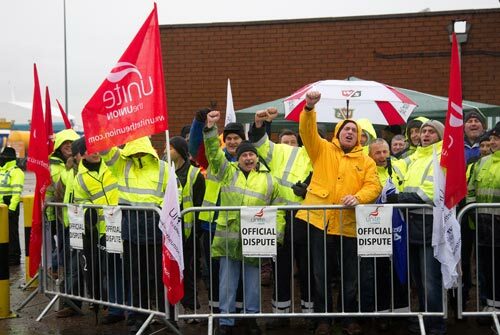 Petrol tanker drivers have the power to beat bosses